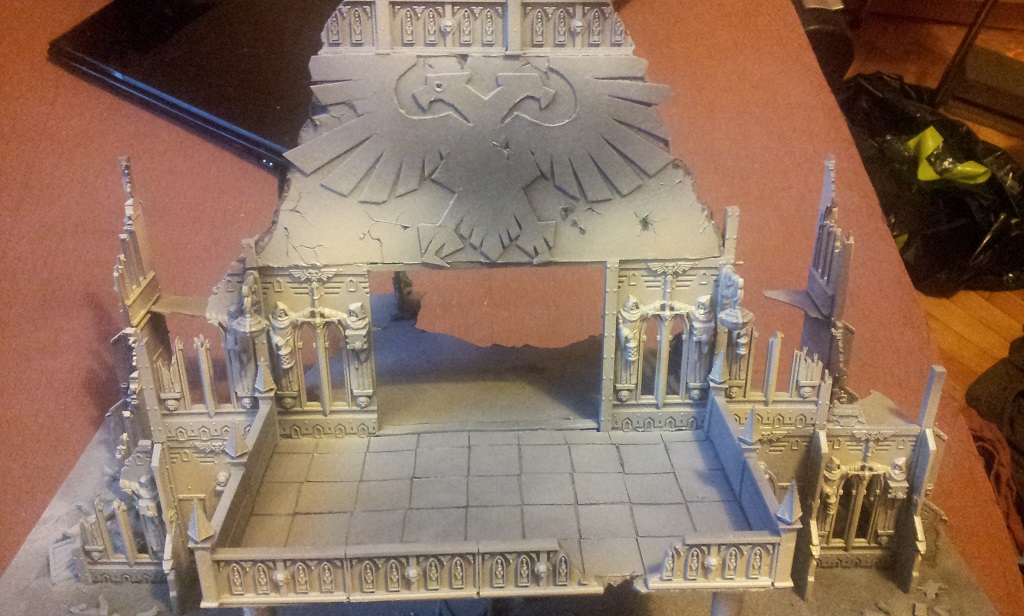 My next project is actually another step in a very long journey which started i think almost decade ago. Ive decided to bring my city fight terrain to the same standard which i try to acomplish with most of my recent models.Some time ago, during a game when ive played with one of my freshly painted army against my friend who recently made a visible porgress with his painting skills it got to me that quality of our armies right now are strikingly contrasting with quality of the terrain on which we are playing. Problem was especially visible on my city terrain which also for some other reasons became a very iritating entry in my personal book of grudges. Its because ive started this project when the first city fight supplement, along with the buildings was originally released, almost a decade ago i think. Back then ive build quite a solid set of buildings, enough to fill an entire table with, and some of them im really proud of even to this day. Still a lot of time has passed since then and during this time ive only managed to get some basic colors on most of this terrain. This is why ive decided that it would be a perfect time to start my terrain rejuvenation project with. So first step would be to finally finish up most of those buldings and prepare the city fight table back for gaming. So the plan is as follows:

So thats the initial set up. As i said many of the buildings were done long time ago but i would really like to add some extra details to most of them, especially to the centerpiece ones. One of such buildings is my administration ruins. Its a larage piece that is split in two halfs, each based on a 12″x18″ board. Thanks to this it can be set up as a single large builging or two smaller ones aligned to the edges of the board depending if i want to center the action around it or not. With this kind of building i would like it to tell its own story. To have details that will trigger the imagination and put a vision in your head of what could have happened there. But at the same time i still need to remember that its a piece of a gaming board so its not practical to put too delicate elements on it or ones that will make moving models around harder. I need to finish part of the walls and florrs to strenghten them and repair what was broken over time. I would like to add some interior details like table, some chairs maybe and some bookshelves on walls to suggest what kind of usage those rooms had but at the same time to keep it near the walls so it will not limit the gaming area. I would also like to add some broken glas to balcony make it more realistic, so nobdy will ask a question where did those window doors go 😉 On the outside some posters and grafitti should do the trick.

Anyway here are the photos of the initial state of the building. Ive already started the work on it so i will probably post an update very soon. 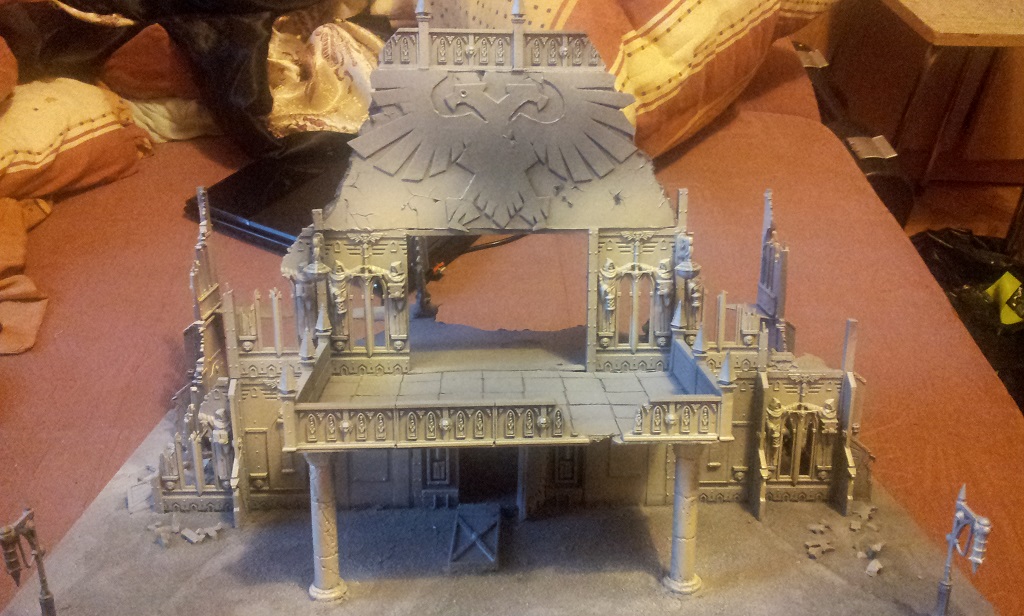 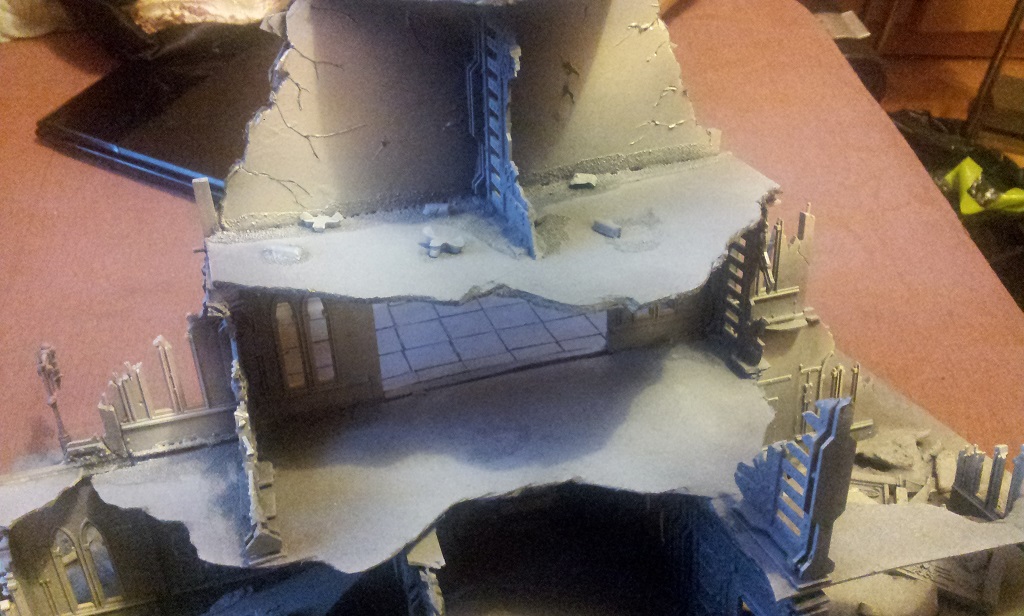 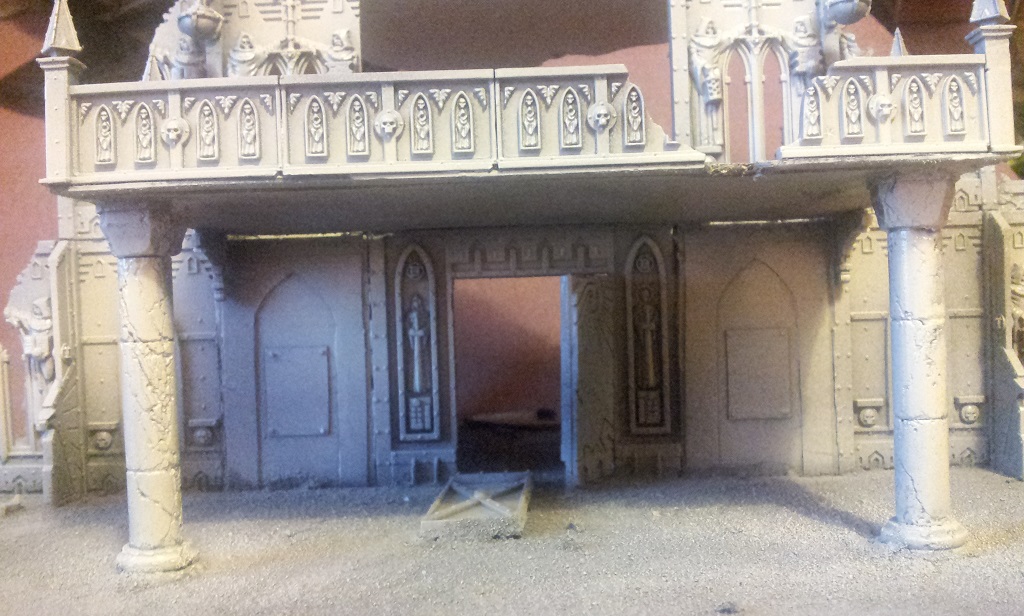 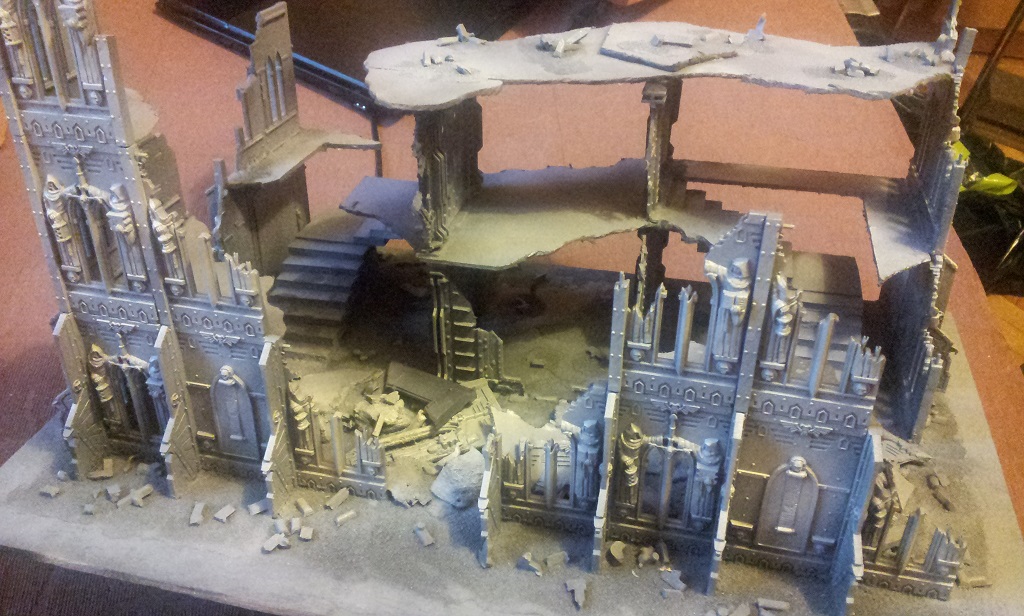 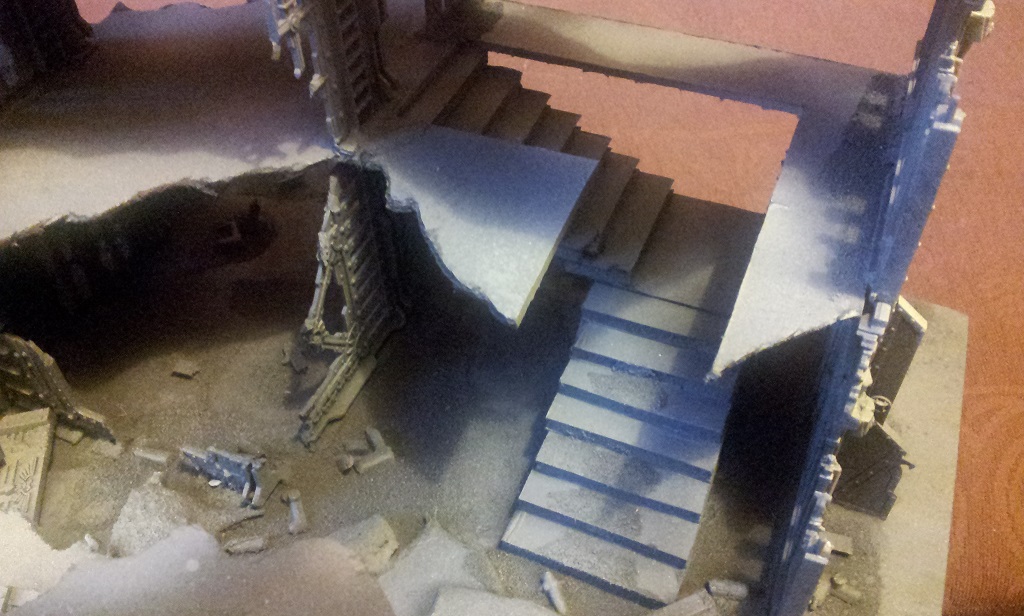 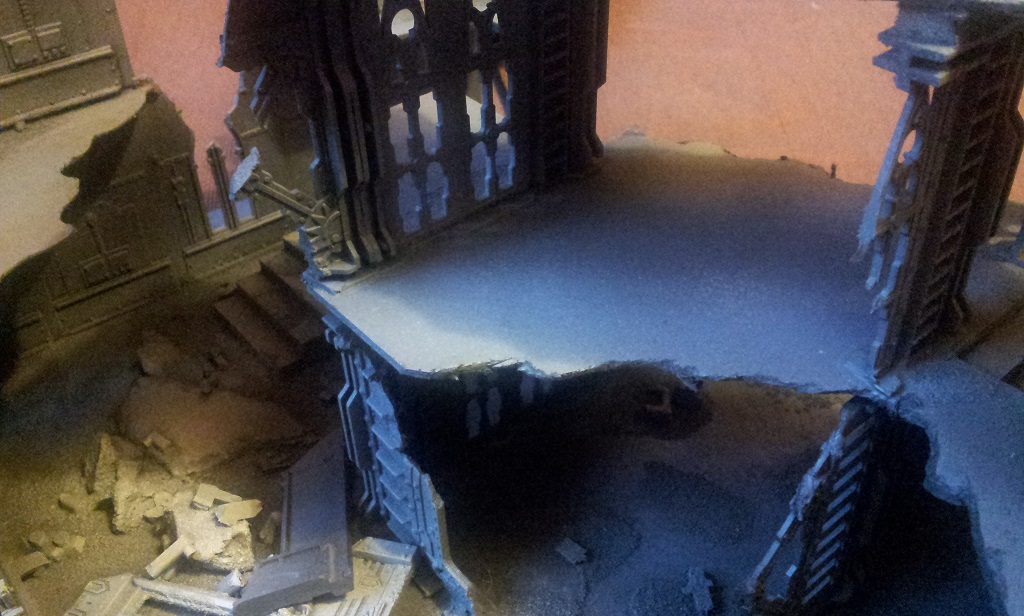 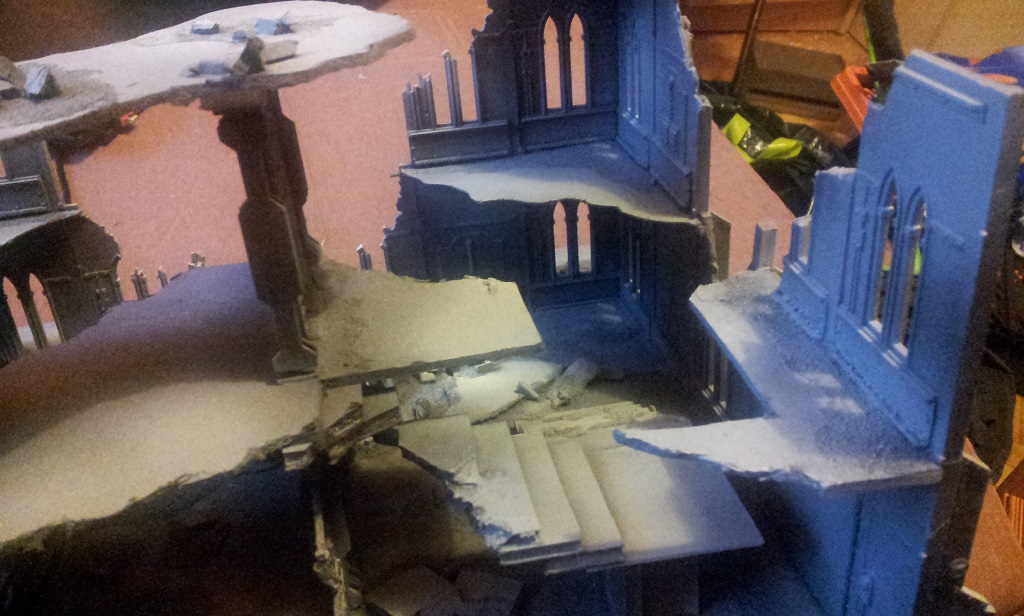 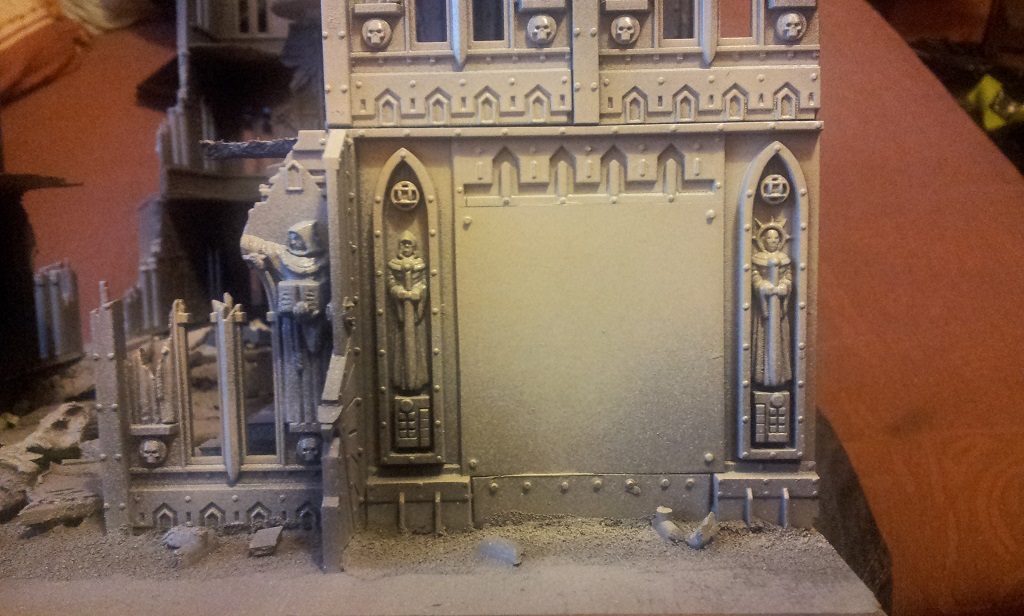 Here is another update. Ive started the painting.

Since its such a huge model the challange was to paint it reasonably fast. I wanted it to look unified and not too colourfull but still to have some eye catching elements so it will not look bland. I went for bright marble/bone look with some green and brass elements. Rubble areas of course needed to be a bit darker for contrast and to represent all the dust etc. Airbrush was the obvious choice for this project. Walls were painted with different mixes of black, white and grey colours with some lighter and darker shades of brown in some areas. Ive also used some inks that ive got from local artists store to bring out the details. Ive tried to use the cheaper paints as much as possible to make this project more cost efficient.

The most visible and characterful detail on this model is the giant imperial eagle on the front of the building. Since its an administration building i wanted it to look as if its made of some good class material. After considering some different types of metal ive finally seted on stone – green marble. To make it even more distinguish i wanted the back wall on which it was placed to be also marble but the color that will look more in line with the rest of the building. Ive never painted marble on this scale, and it was quite a challange. Im not sure if im happy with the final result but it looks ok for now. Perhaps i will make veins a bit more visible later.

To make the interiors a bit more realistic i wanted floors to be painted in different colours than walls. I wasnt able to find a color that would look convincing in this setting. Its a representative building that should look at least a bit classy so the floors must also stand out. So ive decidec to paint them brown and then put some lines on it to make it look like wooden floor

I wanted to do a similiat thing for the concrete walkway outside but it wasnt looking good enough with just painted lines so in the end ive done some filing to make them look more 3d.

Over the weekend ive managed to add some details to the building interriors.

Ive wanted to add some credibility to the model interiors so ive looked for possible details that could improve it but also not affect negatively the playability of this building. Ive concentrated mostly on the balcony and the room connected to it. It should create a feeling that some important administrators were use it as an office, so first thing that came to mind was to add typical office trapings like desks, books etc. Ive managed to find some very cheap models on some auctions. They will fit there very well as they can be placed along the walls so will not limit the playing surface.

Another thing was to add some debries to the balcony. Since its a ruined building then most probably the window doors will be gone, but at least some broken glass should be left in place. For this ive bought a transparent plastic sheet from my local hobby store and cut some of it to pieces. For the door frames ive used thin plastic rod painted brown.

Thats it for now, what do you think?
I plan to add some more minor details but most of the building is almost finished, i will post some photos of the whole model soon.

Here are the promised photos of the whole thing.

Some more details shots. Ive choose few of the posters that were most aproperiate in my opinion for this kind of building.

Here are some photos with minis for size comparison. Each section is based on 12″x18″ board so the whole building is a 24″x18″ area.

Next step is to finish 3 smaller industrial style buildings that were also completed from the same city sector set. It will go much easier as they were already mostly painted so i will only need to add some details. Coming soon.

It took me a while longer than i thought it would but im currently occupied with moving to a new flat.
Anyway here are the pics.

I have 2 more buildings made in similiar style and i want to finish them all in one go so expect a bit more of the same in the nearest future.

And here comes the second of the industrial buildings. Smaller, without that many floors. Also i didnt add any posters to it so i would not over do it.

Lately new dwarfs cought my attention so probably i will slow down a bit on this project, but hopefully my motivation will return with the new knight titans 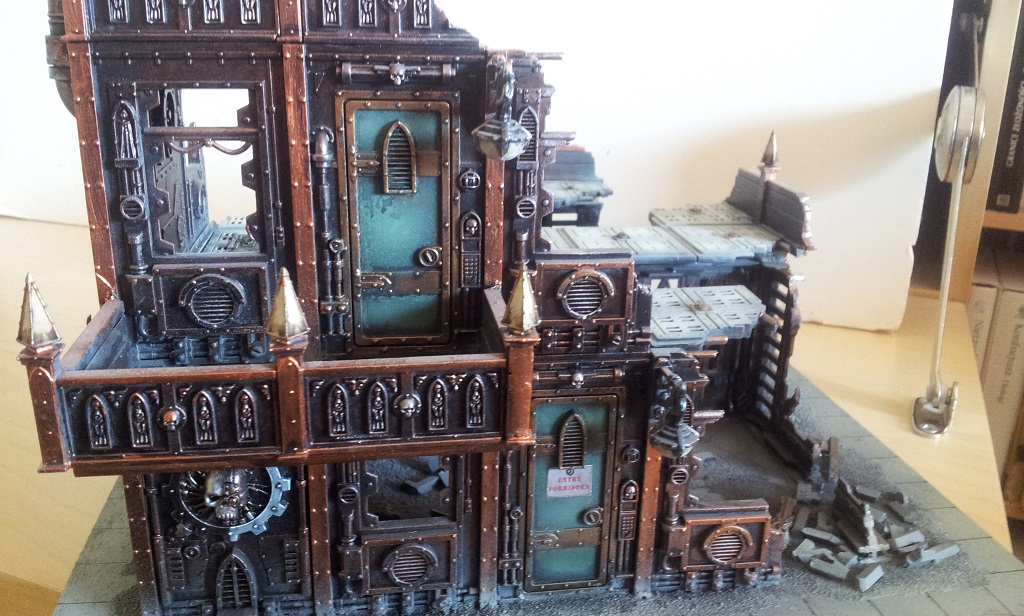 Here goes the last of the industrial buildings. It was done in the same style as the previous two. 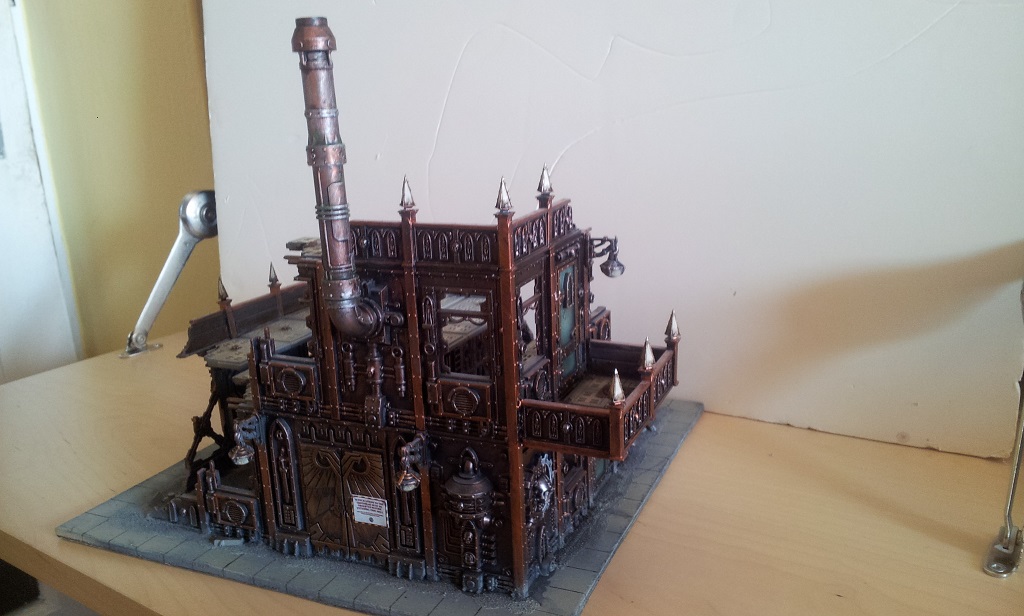 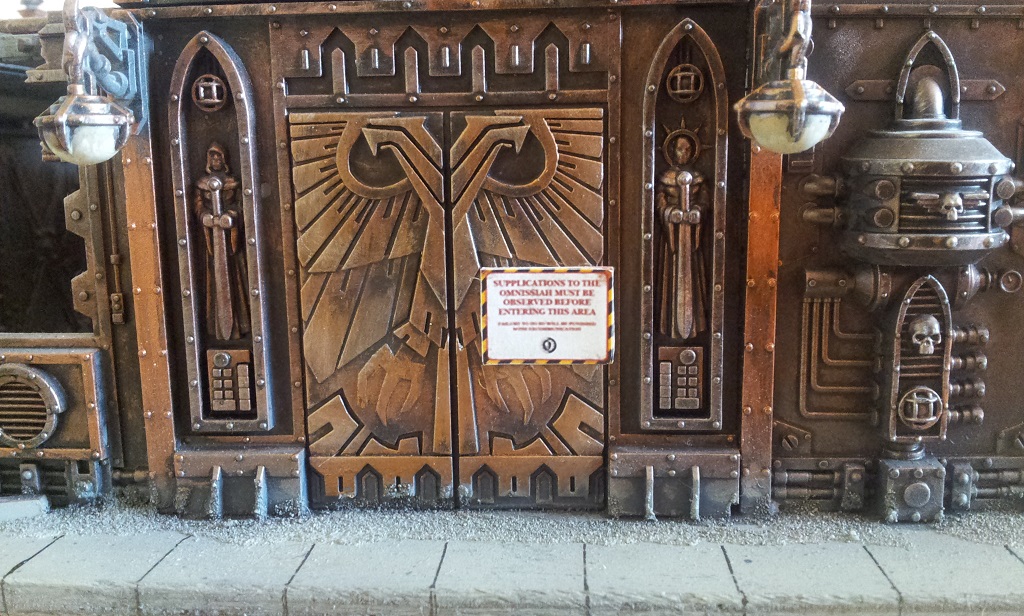 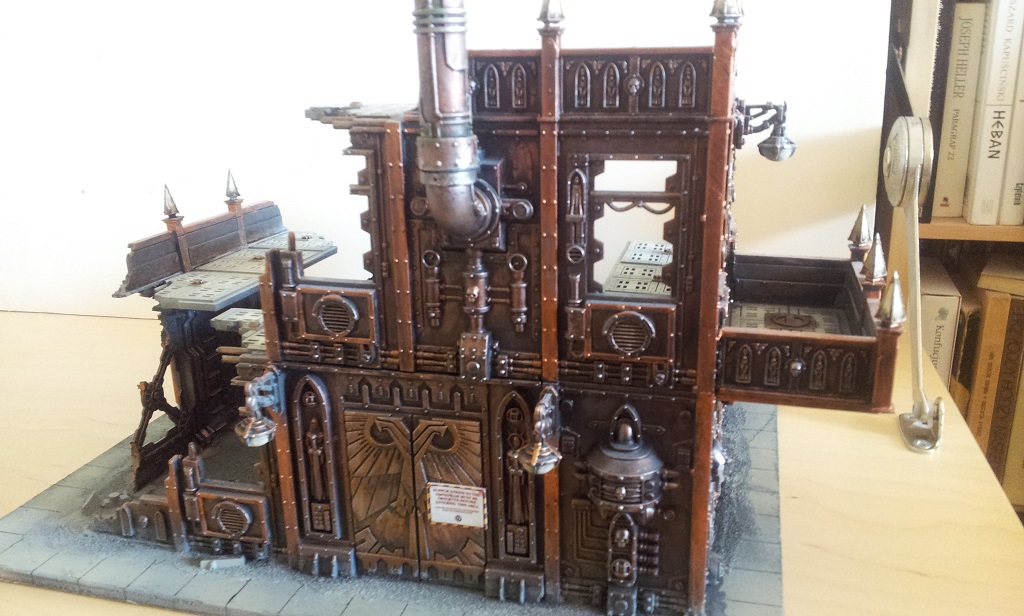 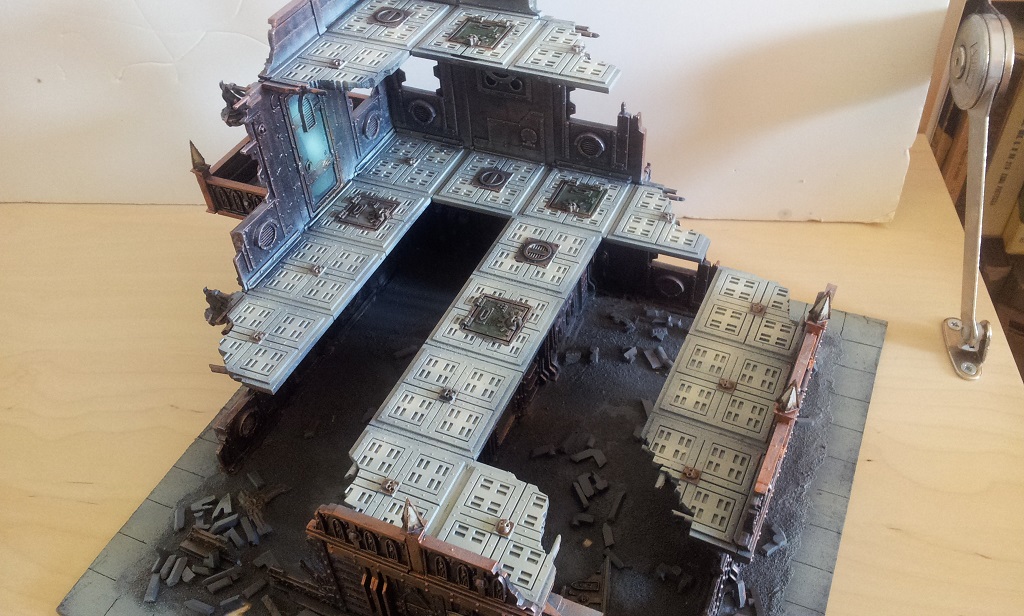 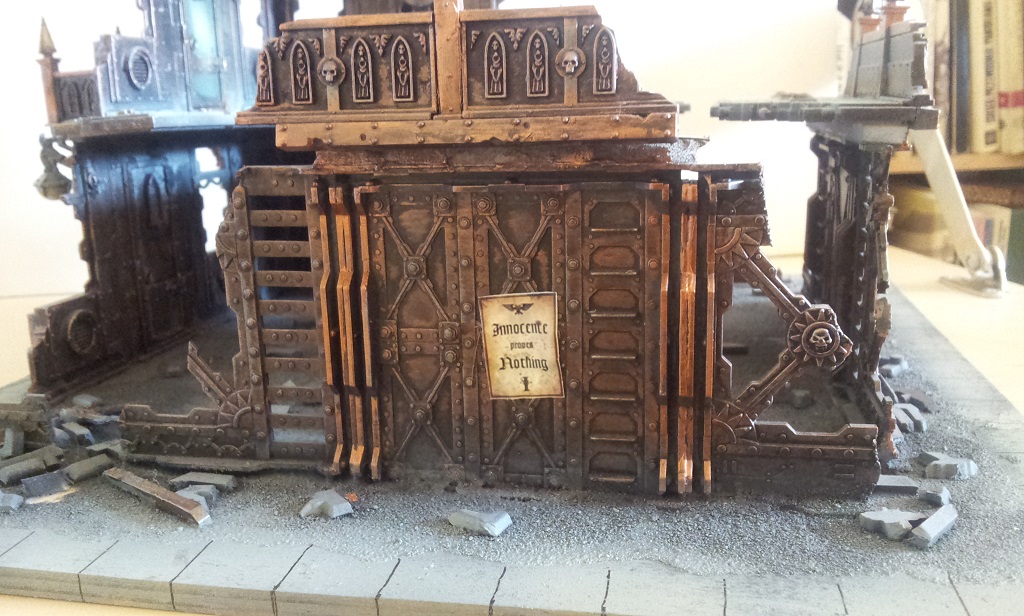 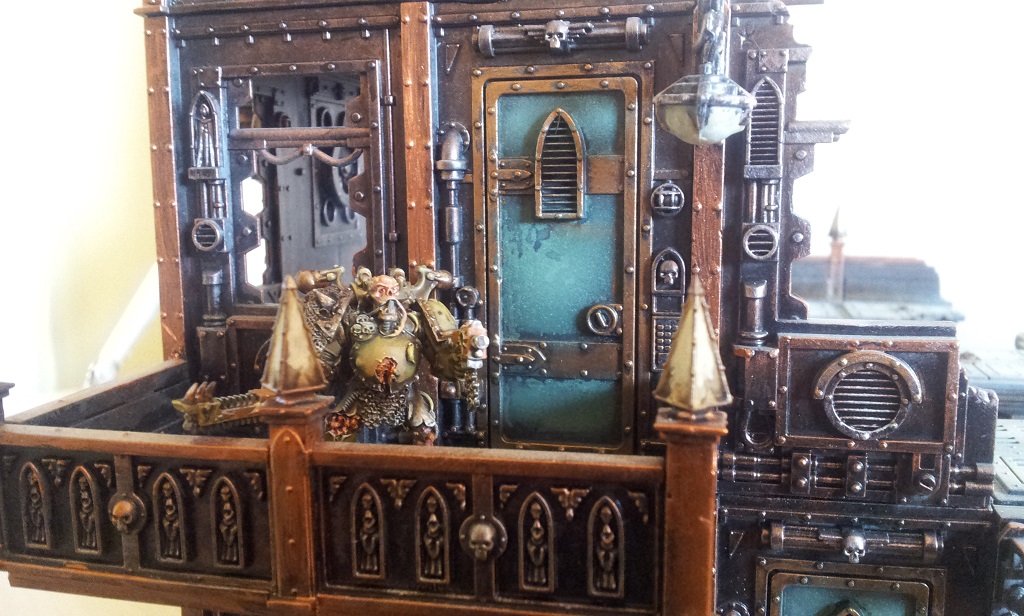 Honestly im not sure what scale those sets where intended for but definitelly not 28mm when you look at the size of the doors and height at which the window is starting. Its more suitable for Inquisitor games.

With this one done ive managed to finish off those buldings that ive had constructed for some time now. So how my grand plan is progressing?

First two points done, next one is a big one – designing and creating a gaming surface for the whole city. Ive planed to done it by hand but now i have something better in mind. More about this soon, but right now i think i need to take a short brake from terrain as some other project is awaiting its turn 😉 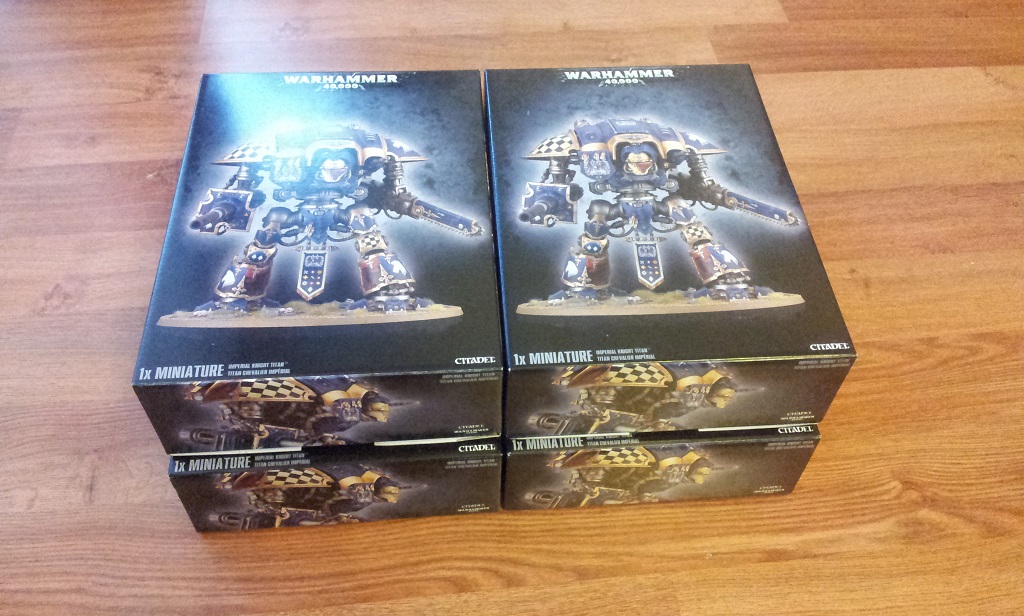