Lord of the Ice Garden – review 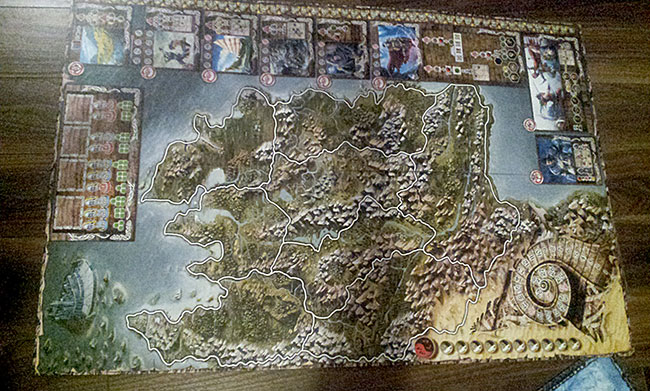 Few weekends ago ive managed to play my first game of „Lord of the Ice Garden”, strategic fantasy game based on a series of very popular books of polish author Jacek Grzędowicz. Here is a short review of this experience. 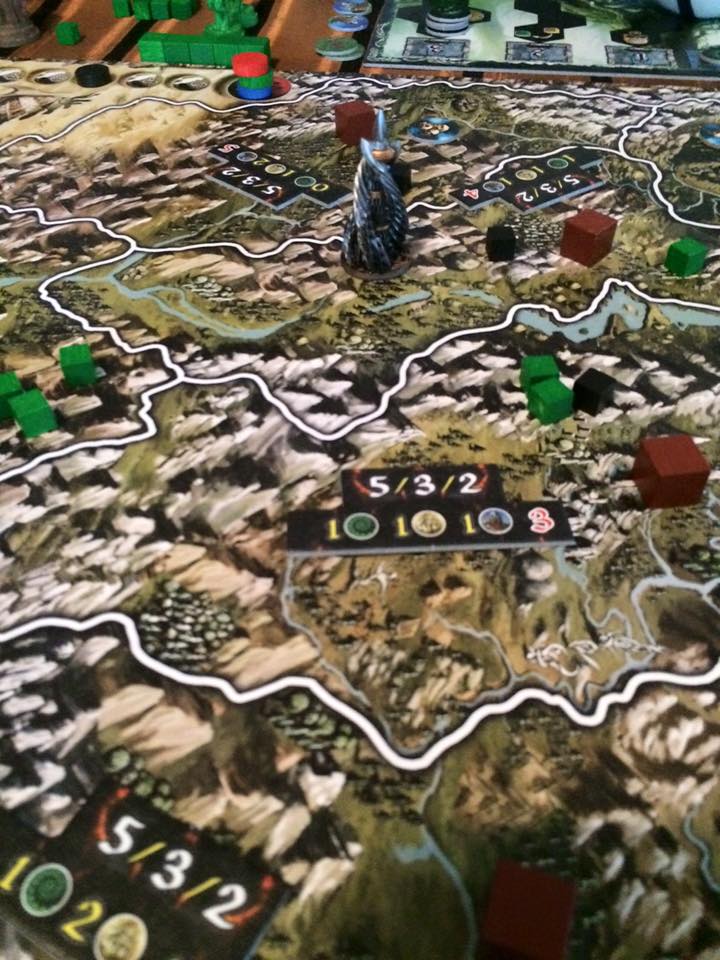 For those who are not familiar with the game world here is a short description of what is it about. I will try to not include too many spoilers, at least nothing that you will not find in the rulebook. LoIG is an unusual mix of fantasy and Sci-fi. Its placed on a planet discovered in a not very distant future by our civilization. Since the planet was already inhabitet a decision was made that no official contact should be made and instead a group of scientists was sent on a secret mission to observe and gather information about this new world and its culture. Shortly after the landing however all contact with them was lost. Second mission was immiediatelly considered to sent a single super commando toughened up by nano-tech and other cutting-edge gadgets, to find out about scientists fate. This man called Vuko who is also a protagonist of this story was to help the previous expedition members if they are in trouble and extract them and any indications of Earthmen activity off this planet. What he found on the surface was totally unexpected as it turned out that no technology was working, instead some unusual magic-like distortions of physic laws were present and the very scientists that he was suppose to rescue became powerful wizard-tyrants bent on shaping the world acording to their will and fighting each other off in strugle for domination. What i really liked about the books is how this world sounded insanely surreal at the begining and how it made more and more sense as author was explaining more about it. End of the series provided satisfying explanation about all of the planets strange history and all those strange phenomenons. But this game is not about it. Its also not about Vuko, the main character of the books. It is instead focused on the scientists strugle for supremacy as each of the players plays a role of one of the four powerfull wizards from earth. 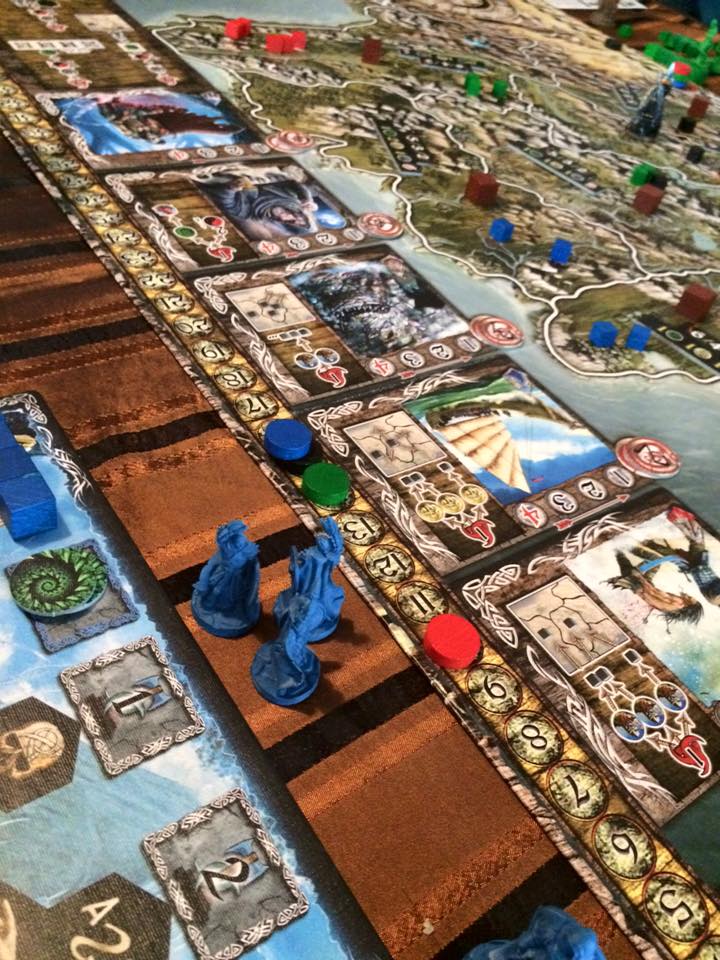 First a word o warning. This game is not a light beer and prezels affair as it is a bit complex, not easy to learn and requires focus and involvement from all players.
Board represents world from the novels divided into smaller lands. Players are competing against each other by moving resources and units to each of those lands and trying to achieve domination each turn. Domination is a key word here as in every turn you check for each land which player is dominant in that region and not only he receives the best rewards for this but also only his units are able to use their special skills which are usually crucial for achiving personal victory goals. Speaking about which, there are few different ways to win this game. One is through victory points which you gather on some(not all) of the turns for dominating regions. Second is through special victory conditions different for each player. Third is when the game ends after fall of the dead snow(more about this later) which immiediatelly ends the game. Victory this last case goes to a player with the best reputation which is another characteristic that changes during the game. Each player differs not only by conditions he/she needs to meet to win the game but also through units that can be summoned with magic. 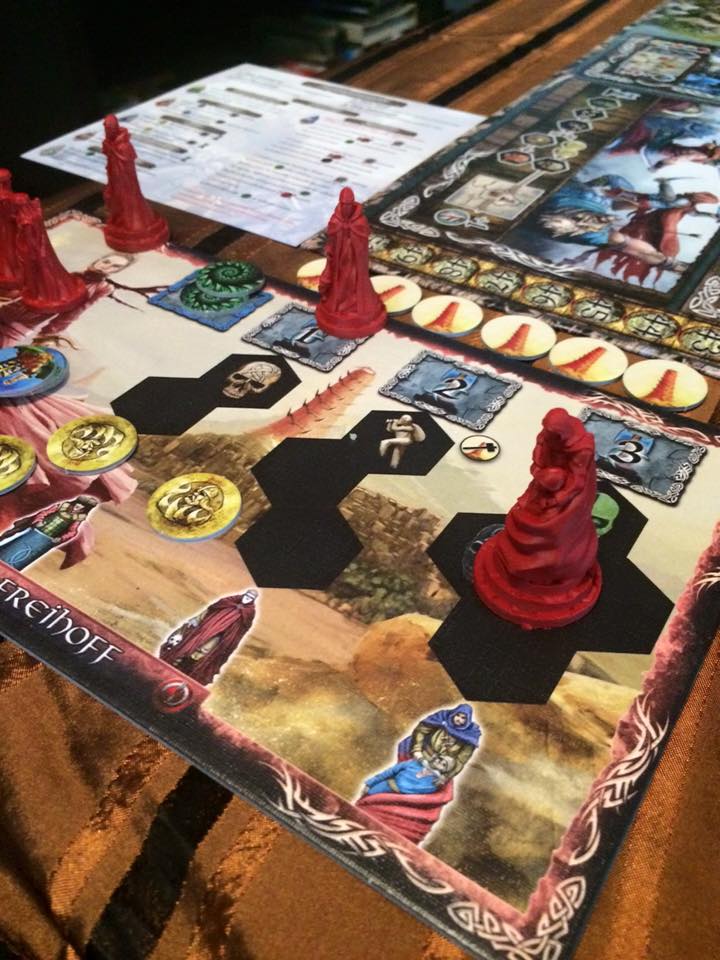 Each game turn is divided into 8 sections during which players can gather resources, create and move units, use magic to summon special units and do battles over the lands. Each turn is ended by the domination phase during which resources are won and special events ocur triggered by victors skills. Each turn players receive between 3-5 action tokens which they can divide as they whish among those phases. To make it even more complex there is a special representation of Vuko who travels through the land and actively acts against players making their lives harder. As i previously said magic have strong presence in this world. In game it is another resource that can be used to summon very important special units and upgrade them to become more powerful. Using it however is very costly as it negatively impacts the players reputation and makes snow to fall sooner. In the first game we played snow has fallen after 6 turns, by the action of a player who had least victory points but had the best reputation and by this single move he managed to climb to the top thus securing first place. 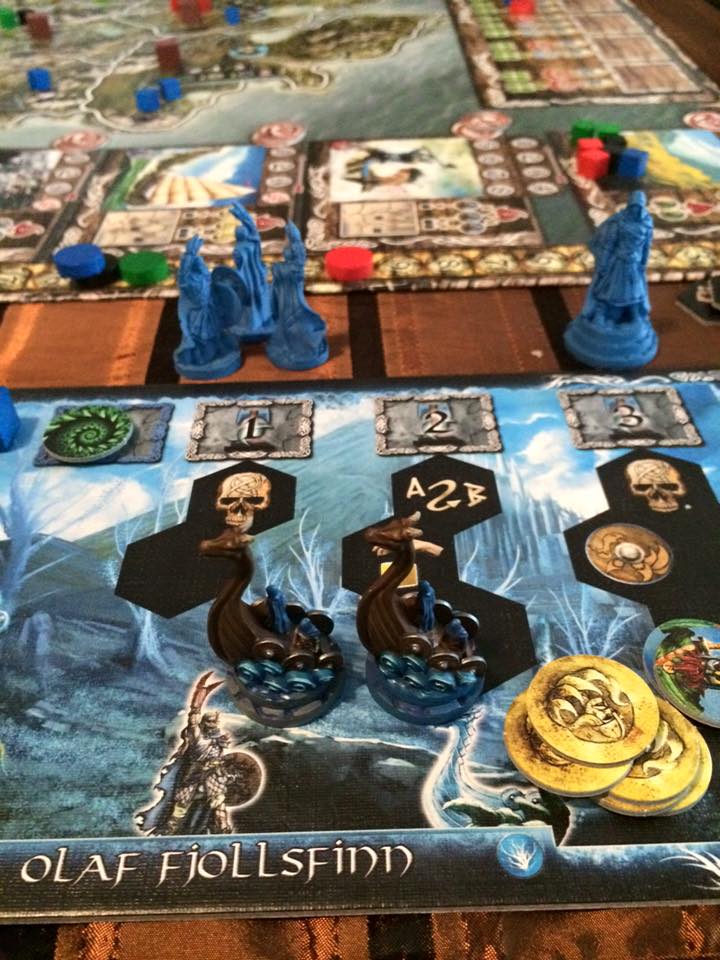 Its a good moment to mention about the overal quality of the product. Board, tokens and models are of a very well made. Two sided board (differentiatet only by aesthetics)is solid and provides very nice battleground for players. There is large ammount of tokens representing different resources and markers for many characteristics that had to be tracked during the game. For me however most interesting were miniatures, and those are also quite nice, both by design and casting quality, however they require a bit of a cleaning, and unfortunatelly there are also small bubles or holes here and there but in my copy they werent in any important places. I wasnt sure if i wanted to paint them but some of them, especially black ones would reallly look better painted so im going to try that. 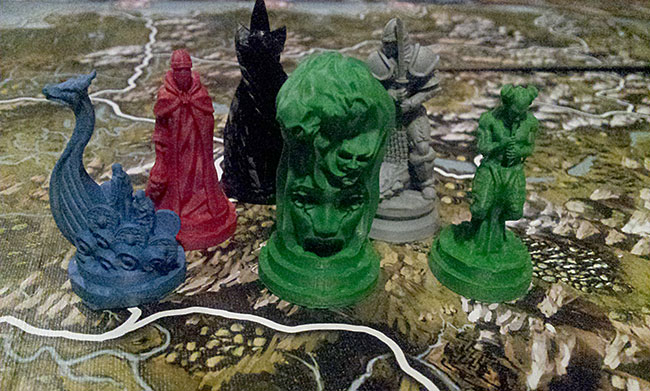 Overly the game is very engaging and rewarding but requires players who are willing to learn the rules and focus during the game. On our first play-through we managed to close each turn in 30 minutes on average. Only half of us red the book and although each of us really tried their best the game was at some points tiring for those who didnt prevoiusly had contact with the book. Thats why i said at the begining that this game is not very casual and requires player who can really engage in those kind of strategic games. What i enjoyed most hovewer was the fact that game mechanics captures the spirit of the novels quite well. Its something that in my opinion is very important when you try to make a product based on some existing ip and here it played very well. Im looking forward to the second playthrough and also to try another game from the same studio, also based on a famous series called „Achaja”. More on that soon.