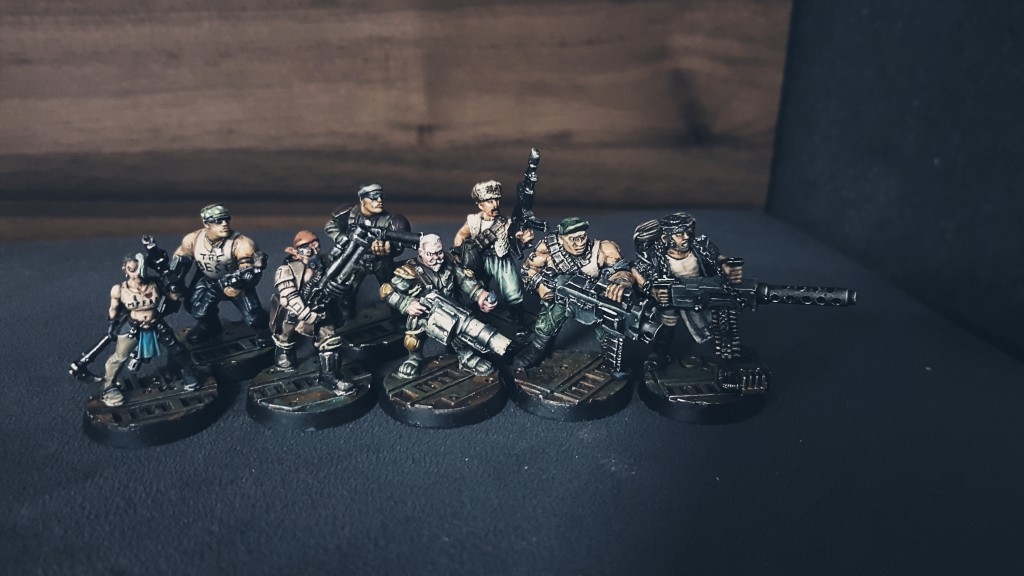 Stranded on one of the most dangerous worlds in the imperium. Group of space-faring smugglers look for profit and oportunities.

What are we doing on this shithole? Ship is grounded while captain and most officers wandered off emperor knows where, attending their own business. How typical for him to say „Borys, take few men and make profit on the cargo from container C-27J. Oh, and get some supplies and ‚voluntiers’ while you are at it”.  Saying that he just turned around and dissappeared into the hive leaving us with this whole mess. Oh well, business as usual. This place is famous for offering opportunities to creative individuals, so maybe we can still turn this trip to our advantage. 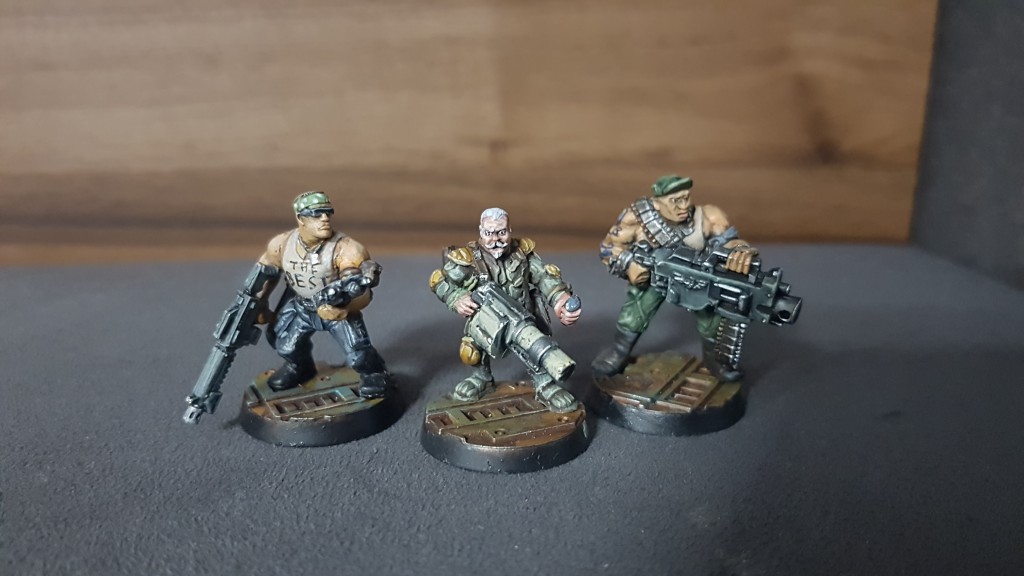 First thing first, we need a base of opperations. Didnt need to look far for some promissing settlement. Time to introduce ourselves to the locals. Shut windows and doors didnt bode well though. Only sounds were coming from a nearby ruins. It turned out it came frombanch of oversized muscleheads who looked like they are eating guys from Catachan for breakfest. Local mutants perhaps? This planet looks suspicious from the start.  When they saw us they’ve started to flex biceps and shout something like „get the fuck out” and some other indicencies. Two controlled bursts from Mo’s heavy bolter helped them reconsider their priorities for the day. Having that out of the way we could go back to our main business here. Locals done some thinking it seems, and started to come out from their houses cheering us up. It looks we are welcomed guests now. Maybe this place will not be so bad afterall. 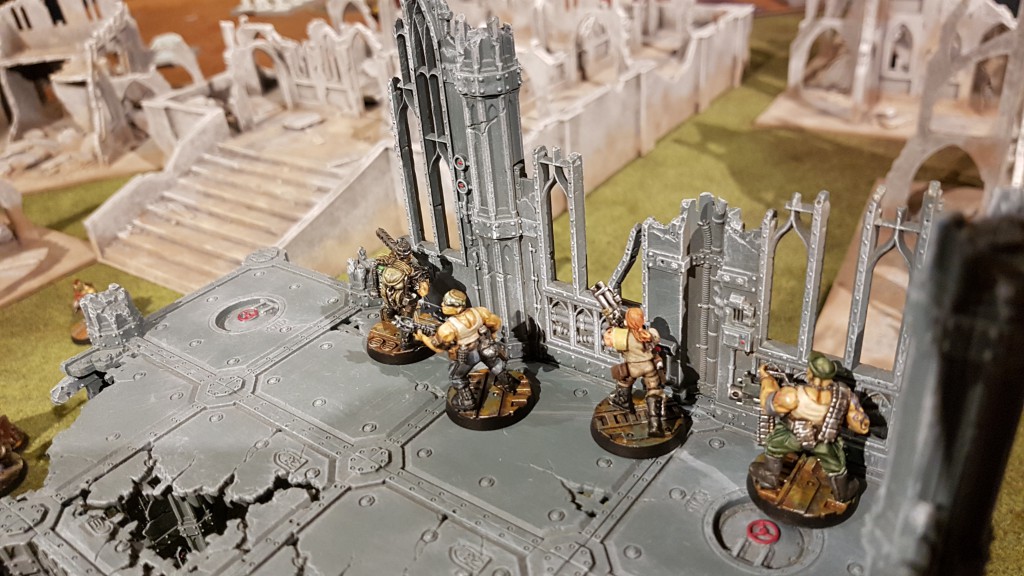 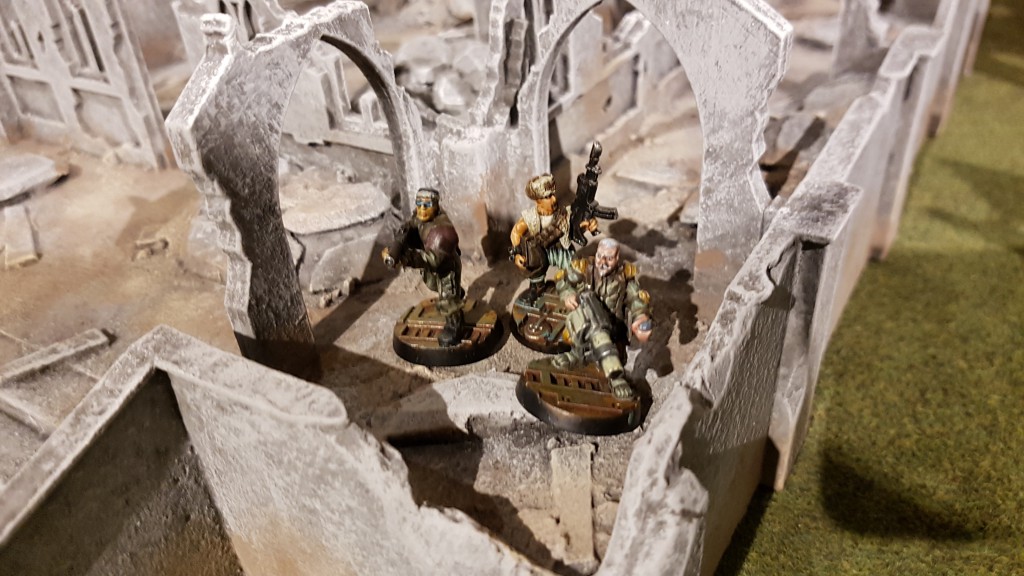 Profit turned out high indeed. They were buying all sorts of useless offworldish gismos we were pushing until theyve got no money left to spare. Not sure if they really liked that exotic stuff or were just simply afraid of us. Dosent matter. Theyve also showed us some tunnels leading to an even bigger setttlement. Ive took Volko and Jacksen to take a better look. Of course we took another bag of merchendise with us.

I think we got overconfident as we didnt expect to run into those mutated thugs again. Not so quickly, not during the day on a busy street, among normal citizens. Well it turned out they were also ‚normal citizens’ here. Can you imagine. Not mutants, just some sort of… body building enthusiasts i guess? Did ive mentioned that this planet is sick? Anyway theyve noticed our hesitation and gave us a closer look. Its time to show those leadership qualities, so ive said to the guys „Lets move on as nothing happened. It was dark that time and they were quite a distance away. Probably they dont even know how we look”. So we started moving forward. Casually. We tried our best but i could see my comrades were on the edge. Those meetballs also started to walk, slowly, clerly trying to match some pieces of a puzzle in their head, but well, they definitely dont look like the sharpest knives in the drawer, if you catch my meaning. One of them though looked more nervous than the others, staying a bit behind the other too and staring more intensively at us.  I think it was a guy hit by the Volko’s autogun. Damn it, ive should have taken Cage instead of him on this trip. It didnt take long before neurons in that guys brain finally connected. He shouted something to his pals and they all went for their weapons. We did the same of course. Their body mass made them slow and we got our guns out faster. It was too late though. They were too close already. Instincts took over and theyve just charged us closing the distance to their advantage. I will spare you the nasty details, but me and Jacksen got lucky, geting only some bruises before we broke away and run off to safety. Volko however took the worst part of their fury. I was really thinking he is done for. So much blood. This show of primal violence obviously satisfied our adversaries. With a happy looks on their faces theyve spit on Volkos mutilated corpse and wandered off to whatever destination they were going. We waited until they were no longer in sight and went out of hiding to get our comrade body back with us. To our surprise Volko get up on his own, smilling and seeing rather healthy. Oh right, red paint trick. Volko you clever bastard! 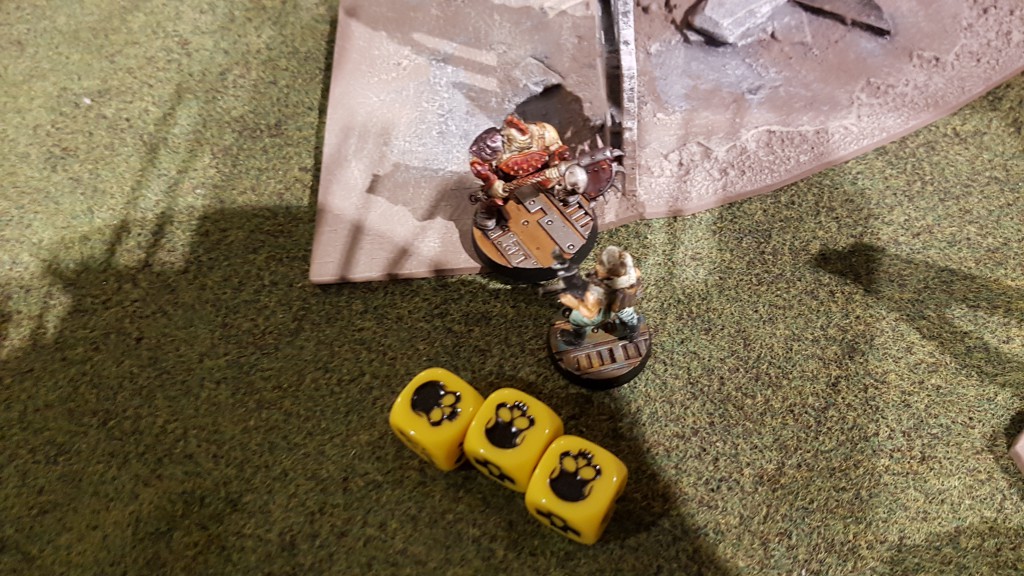 Each day on this planet brings more surprises. You wont belive what things can be bought here, far from the sight of the merchants guild.
We met this bratt Yolanda in Broken Pipe settlement. She wanted to join the crew to get away from this shithole. See the universe full o’ wonders, hehe. Who can blame her, right? We are not a travel agency however, no matter how cute she is. If she wants to come she needs to bring something to the table. It turned out she had some connections and took us to a guy who knows a guy who sells a tip top condition Luther Pattern Automatas. Can you believe that? I dont know where he gets the stuff and i dont care either. We got enough credits from selling the merchandise to get one. Those things are irreplaceable if you want to move cargo or do some excavation. Every space-faring entrepreneur best friend. 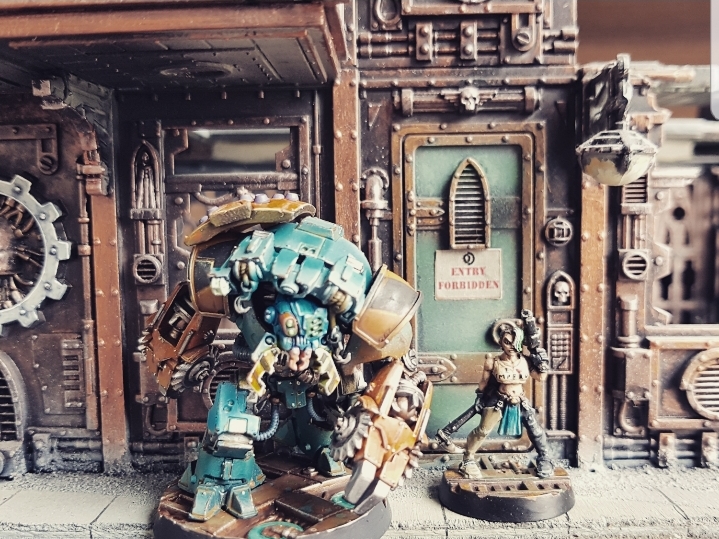 Soon we got opportunity to take our purchase and the new kid for a test run. There were rumours about a weapon stash hidden in ruins somewhere near.
Cant allow for such dangerous things to lay around, can we? Someone can get hurt. So we went there to move those crates to a safer location. Somewhere back in our place obviously. That didn’t sit well however with some ladies that occupied that area. We tried to get through this politely at first. We were like ‚easy girls, no reason to fight, there is plenty of us for all of you’ and they were like ‚die men swine’ and went full guns blazing. One of the crazy bitches even run across the bridge under heavy weapon fire with just two chainswords in her hands. And she almost made it too! Almost. New girl also shown some initiative and outmanoeuvred one of those crazy chicks for a nice short range flank shot with a stub pistol, but then got hit back by another ganger hidden in the ruins above her. Lucky for her it wasn’t anything serious. Now she knows what price she may need to pay for getting out of here. It didn’t take long for rest of them to realize how outmatched they were. They run off into the dark, leaving all the loot for us to take. 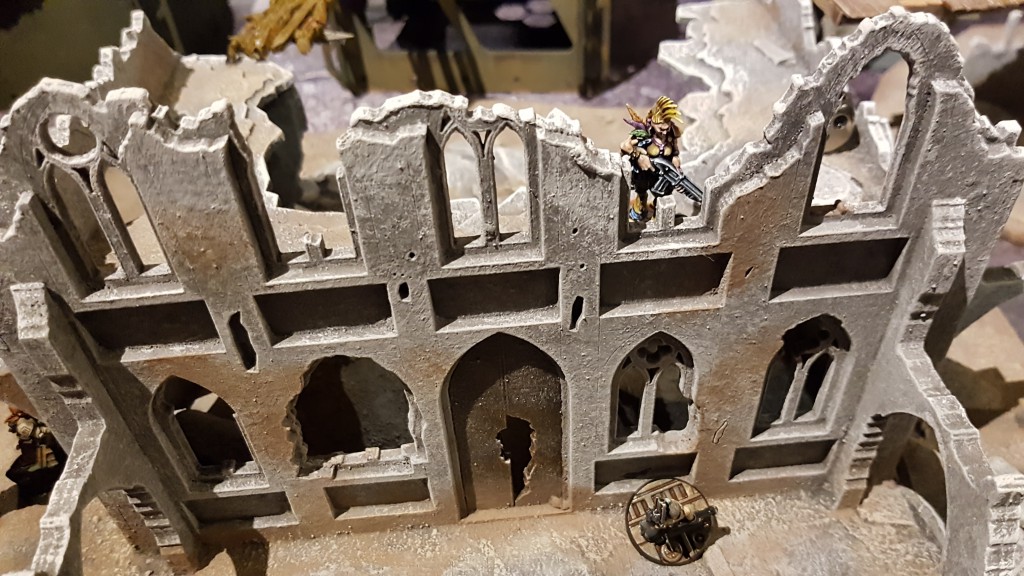 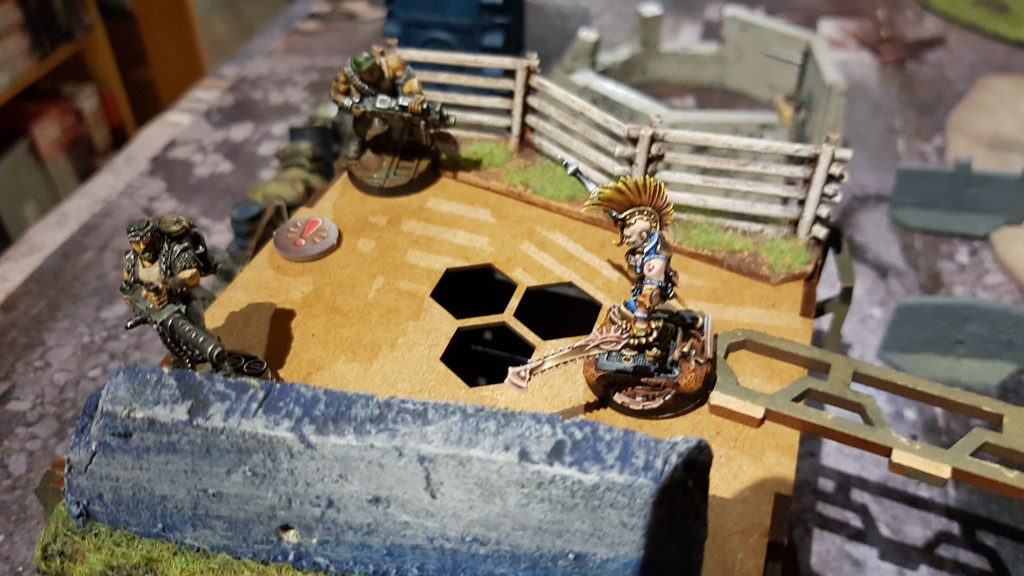 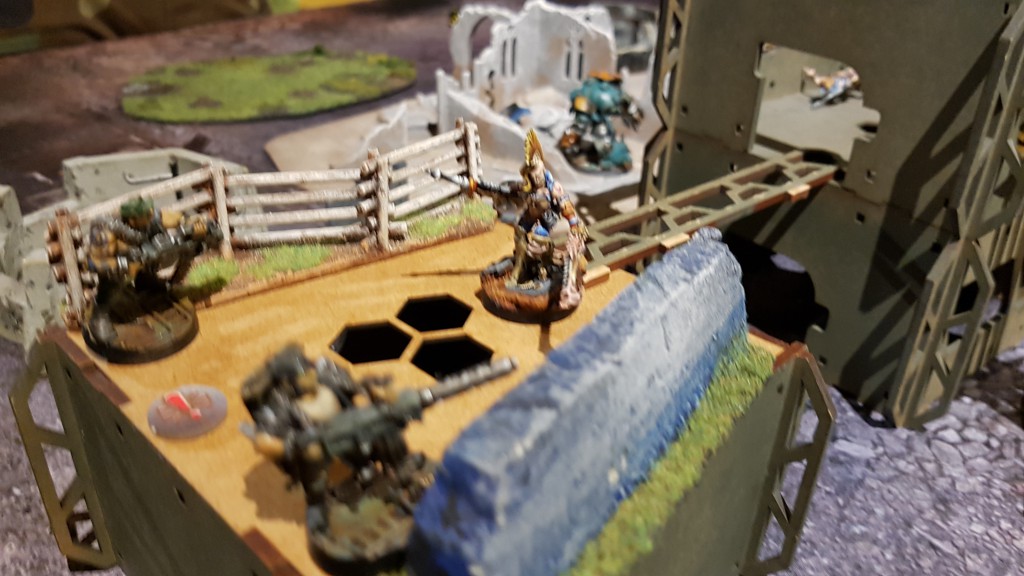