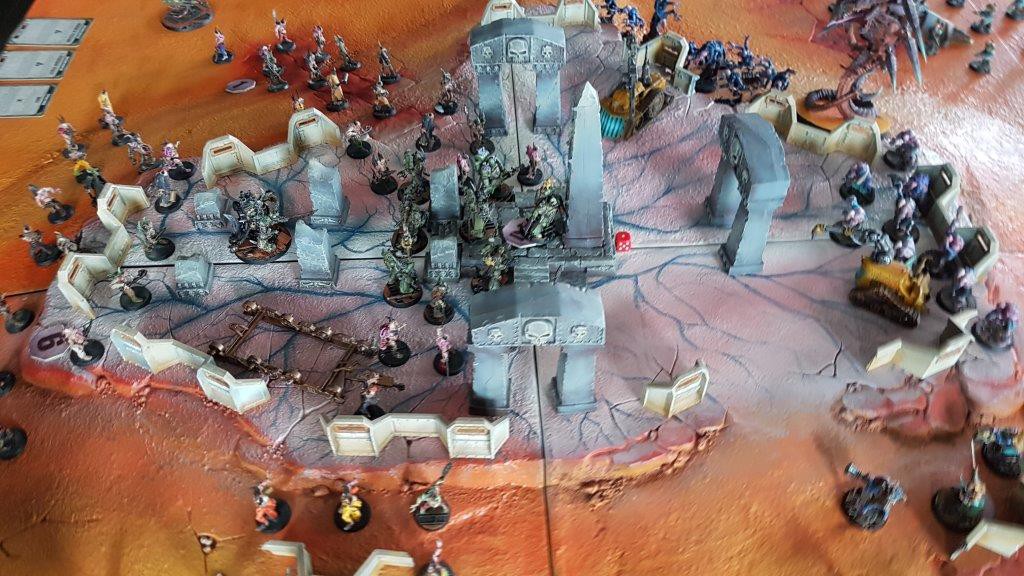 Final clash to stop the ritual is over. Here is the summary of last game and the whole campaign.

That was a really enjoyable battle. Not very big, only 1250p but with many models on the table.
There weren’t any special scenario this time. We just played ‚take and hold’ with tactical objectives. It really took us long time to get back to 40k and we still didn’t had much enthusiasm to dive into its more complex parts. That’s why we decided to keep it simple and not spend too much time on getting a fancy scenario. Especially that it was also our last game in 8th edition. It was fun, it was bloody and gave us a satisfying ending. Main goals for us were as follows:

– Get new armies during the campaign from zero to a medium size force. Checked. Ive got Genestelaers Cult while Pawel got his Deathguard, both worth around 1500p now. Fully painted and ready for more action.
– Play narrative campaign that will get us into story driven games vs tournament meta games that we got used to in the past. Also checked. It was fresh and very enjoyable approach that gave us motivation to paint armies and make some terrain.
– Play some fun games of Kill Team and maybe get back into 40k. Again checked. Kill Team was fun, however not as engaging as I’ve hoped. I prefer Necromunda. However KT allowed us to start new armies and test some cool ideas (like playing rogue trader crew) that would not be possible with other systems. I

We really took the lightweight approach and didn’t even planned the story line for the whole campaign. It was evolving from one battle to the next but turned out pretty coherent. Started with band of rogue trader smugglers excavating some ancient stuff on a remote planet. Of course it want bad, as any meddling with ancient things in 40k would go. They were chased off by demonic forces and crash landed again on the planet after failed escape attempt. When all seemed lost a rescue came from unexpected side. Local mining colony. Expected twist was that colonists were actually Genestealer Cultists. From this point campaign was about Death Guard trying to push back new adversaries, retrieve all pieces of ancient relics and complete a mysterious ritual that will undoubtedly bring them absolute victory.

Final battle was about the Cult desperately trying to interrupt the ritual and break the Death Guard forces. We wanted some big climatic ending so that had to be the biggest game in the campaign with new centrepieces for our armies. Pawel went for Typhus and I’ve painted The Great Burrower – a Trygon Prime secretly worshipped by my cult forces.
Neither of them done anything in the game (well, typhus actually killed the Trygon. Then got shot to pieces by mining lasers) but they were great focus points on the table.

„- Lord Typhus, Xenos will attack soon.
– Excellent. We are ready for them. Take all terminators and deep strike behind their lines. They will be brought down from both sides. No one will escape!
– Will you be ok alone my Lord?
– Of course, what will they possibly do to me?
– Are you sure my Lord? They still may present some threat
– Nonsense. They are just some pathetic Rabble with mining equipment. Ill be perfectly fine
– Are you sure?
– Yes yes, now go and prepare the ambush
– As you wish… So are you completely sure?
– Oh for Nurgles sake, yes! Now get out of here!
”

I imagine this discussion took place before the battle. Typhus ended up as the nearest target for all my vehicles and took few mining laser shots to his face. Would live much longer with his terminator escort.

In the end cult managed to score a minor victory over chaos forces and ritual was stopped. At great cost however as the Great Burrower himself were slain in battle. Or was it? I guess it leaves some options for the future.

Campaign ended with a big bang and now we think about next one with new armies. Probably also with the crusade system form 9th edition.