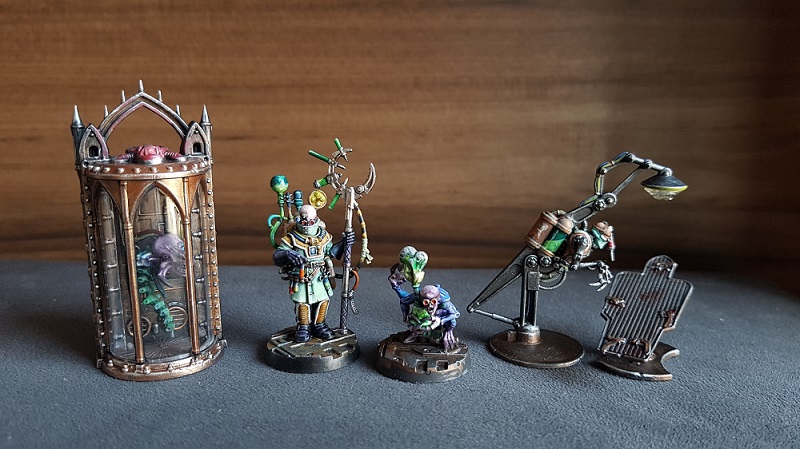 Im back. Its been tiring five months but i feel its finally time to get back to gaming.

Well i wasn’t exactly away from the hobby but definitely took it slow. Not playing any games got my priorities changed from painting models i need for the game to models i want on the shelf to sit and look pretty. Now however with the lock-down gone and an advent of 40k 9th edition i feel its time to finish the narrative campaign we started many months ago before moving on. I really liked how this changed my approach to collecting and painting an army. I was really more into competitive gaming in recent years but now i feel that was something that makes me lose interest in Warhammer. This campaign got me back into more narrative and hobby focused play-style which feel very satisfactory. Im really looking forward to how this is going to be supported in new edition. Smaller combat patrol games and narrative crusade system really looks like a nice framework for this kind of gaming. Hopefully Kill Team will also get an upgrade as it will fit nicely to this approach. Campaign for Bakka 3 originally started as a continuation of Necromunda campaign i was playing with my old Orlock gang „Offworlders”. Ive got inspiration from classic 80’s movies and books about space faring groups of crewmen, engineers and other contract workers that got stuck in some dangerous business. Nostromo crew from Alien is the archetype here. Normal guys trying to do their job and survive in unforgiving space.
Its definitely something i want to build upon later when ill try to expand them into Rogue Trader force. Those few games we played themed around some fishy treasure hunt opportunity that turned out really bad and led into flight and later destruction of my crews vessel was some of the more intense gaming experiences i had in recent years. Not because of the game mechanics or challenging scenarios but because of this narrative element. It brought back memories about what i really liked about this hobby. Competitive play which i did in the past had good sides too, but really lacked this feeling of immersion. I would definitely want to have more of that in the future. This campaign was an experiment as i and my friend wanted to play some kill team as a comeback to 40k universe. We played few different skirmish games in last few years as we took a break from 40k. Kill team sounded like compromise so we decided to try it out. During the Necromunda campaign ive started to write some battlereports and background pieces about my gang and i wanted to continue doing it here. It quickly grew into a more or less coherent story that gave focus to our games. We also wanted to use Kill Team as a slow reintroduction to 40k that will give us time to get some new 40k armies and enjoy some games even at this early stage when we dont have much staff painted yet. My pal got himself a new nurgle force while i was finishing with my Necromunda gang an continued with Genestealer Cult that ive already started few months earlier. Now after those few months of Kill Team it feels like our forces grew enough to try some small 40k games again. We made decision to not keep this campaign up and running indefinitely as its already loosing the momentum. We want to have some satisfactory ending soon, so probably after 2-3 more games we will wrap it up. Now storyline also took a turn into new direction to support this. With the Rogue Trader crew bitten we needed a new challenger to contest Plague Marines plans. I had few ideas how to do this but finally decided on introducing a mining colony controlled by the cult on the same planet. So now the story looks like this: Death Guard took back most of the parts from ancient ruins that got stolen previously. However cult rescued some survivors and also got their claws on remaining artefacts. How crucial those items are is still to be decided but lets say its important enough for Nurgle forces to pursue the colonists and try to get it back. To their surprise they’ve run into an unexpected resistance. 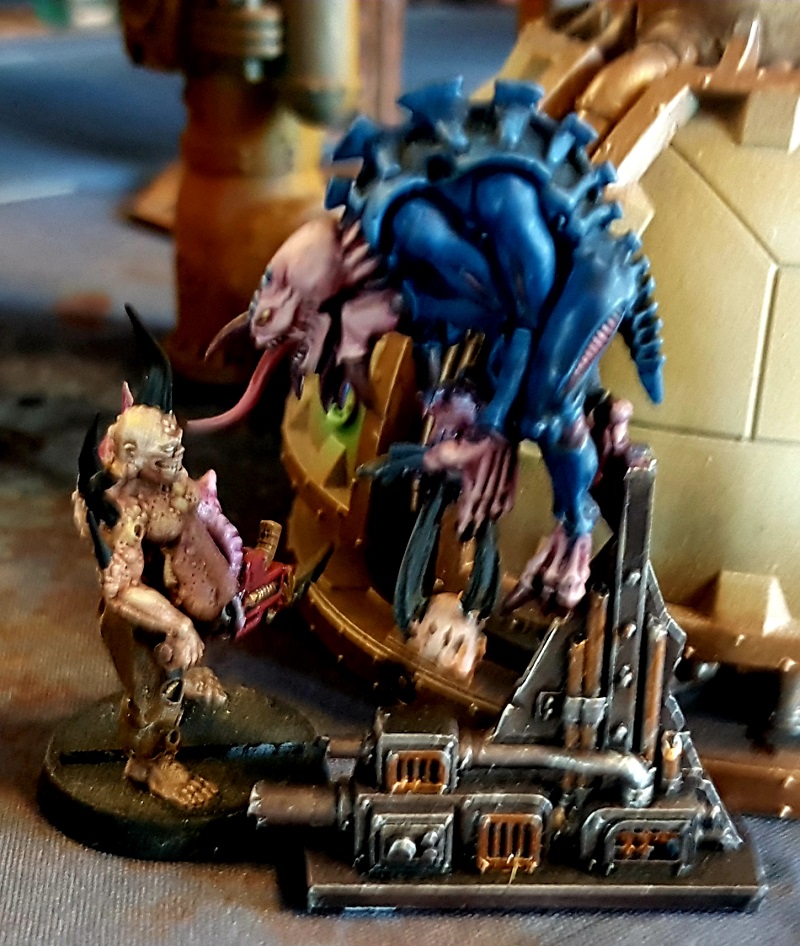 – Mission successful Lord Pandemius. Scavengers vessel was destroyed and all fragments of The Monolith have been retrieved from the crash site. Some stragglers managed to escape with an unexpected help from local colonists. They arrogance will be punished. Colony settlement has already been located and a suitable strike force dispatched. Final victory is in our grasp. Glory to the Lord of Decay. May his blessing fall on us all.

Here we played a small 40k game of 500p per side. We didn’t want to make it too time consuming especially that we needed to relearn the rules. It was surprisingly fun. Yes, we expected less out of it because our experience with last months of 7th and switching to 8th was rather bad. This game just don’t compare well to other offerings on the market, especially board games or some smaller skirmish games (x-wing for example). They have much more solid rules and interesting game-play. Warhammer hobby have however something that those others don’t. Experience of collecting, customizing and painting your army is really something special and i think this is a part we neglected last time we tried 40k. We focused too much on competitive play which no longer holds a candle to other options available out there. Now however with this „reinvented” experience it felt very satisfactory. This requires a bit more preparation to make each game feels special. All miniatures have to be painted. We use lot of detailed terrain to keep it aligned with quality of the models. We also try to decide on the scenario details before choosing forces. That’s still something we need to do better i think. Im always too lazy to get some names for the units and characters but i think i will get back there eventually. Anyway our first game of 40k since start of 8th edition was very brutal with nurgle forces marched over and incinerated cult forces that tried to save survivors from the crash site. Encouraged by such easy victory Death Guard pursuit remnants into a colony facility. Here the fight took a definitive turn as some hybrids and genestealers led by a magus showed up and made a brutal statement which species is an apex predator here. That was also a short 40k game focused on close fight in tight corridors and very dense terrain. Probably too dense for 40k mechanics but that’s a lesson for the future. 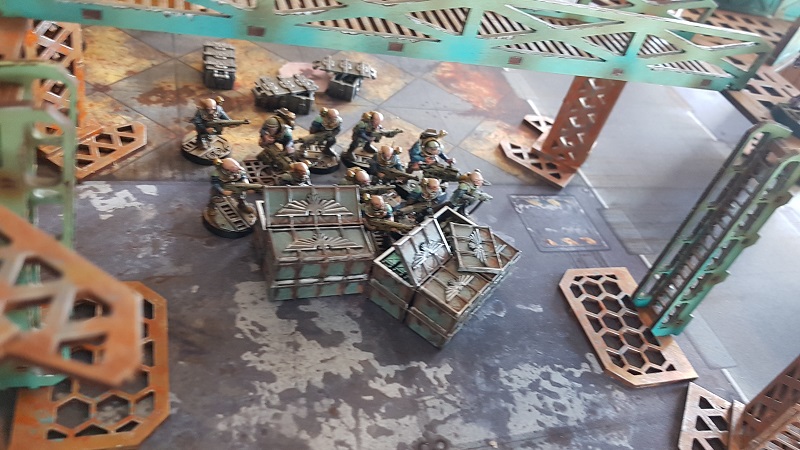 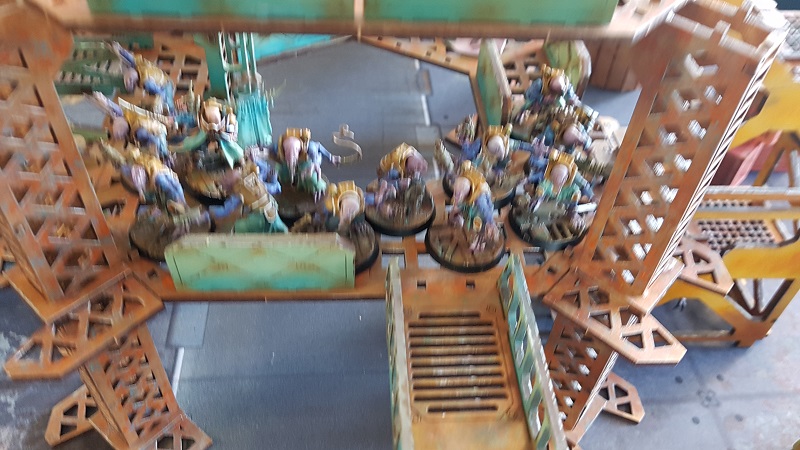 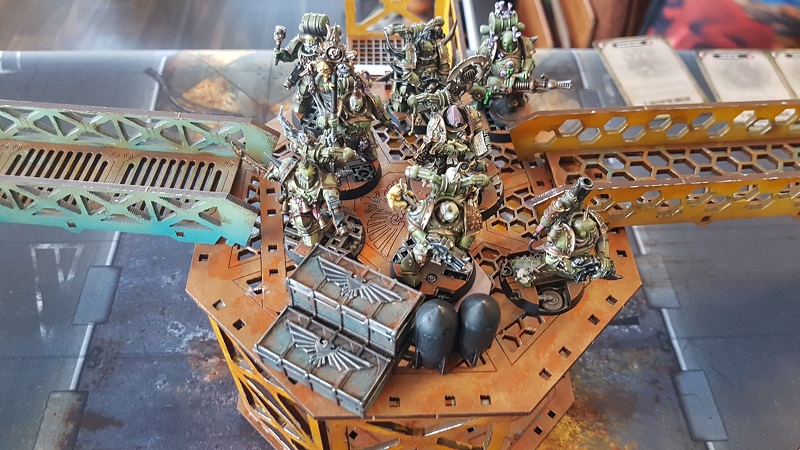 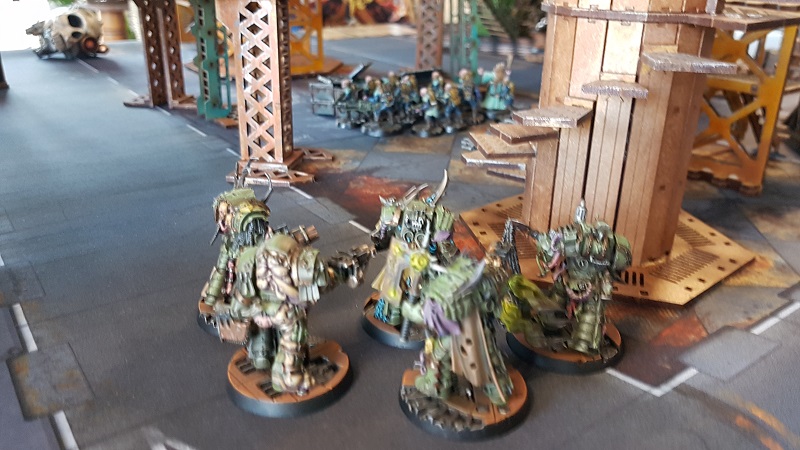 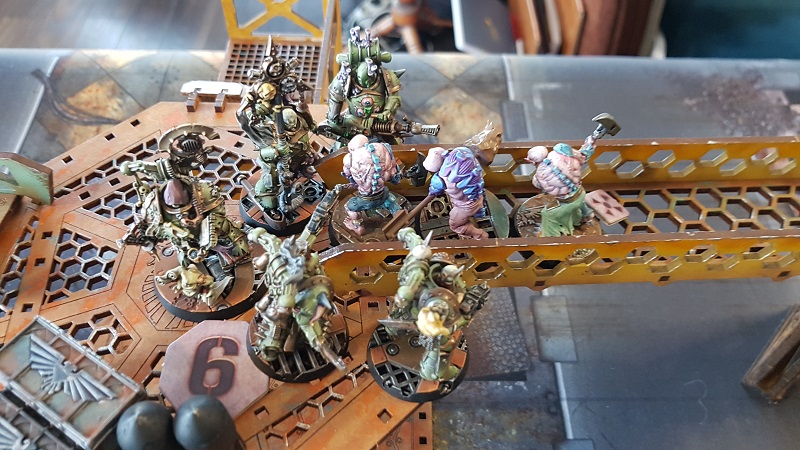 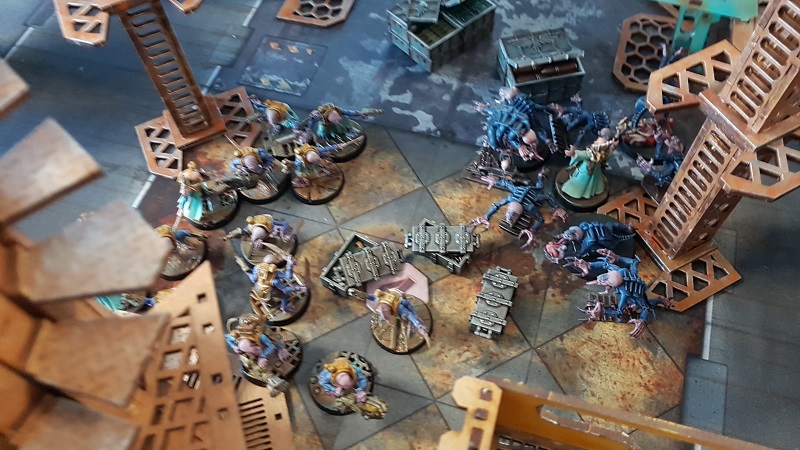 „I bring troubling news my Lord. Attack on the settlement was prevented by an overwhelming enemy presence. Xenos. Combatants identified as Tyranid hybrids. May they flesh rot. Threat level requires estimation. Remnants of strike force fell back and await further orders.
Those are troubling news. Xenos presence may interfere with the ritual. Eliminate with utmost urgency. Our allies in the warp allowed us to detect their weak point. Within colony lies a science facility. Infiltrate it, kill the bio-technicians and bestow Nurgle blessings on all organic matter that you find. Your success will poison their forces and provide us with sufficient time. Do not fail again. ” 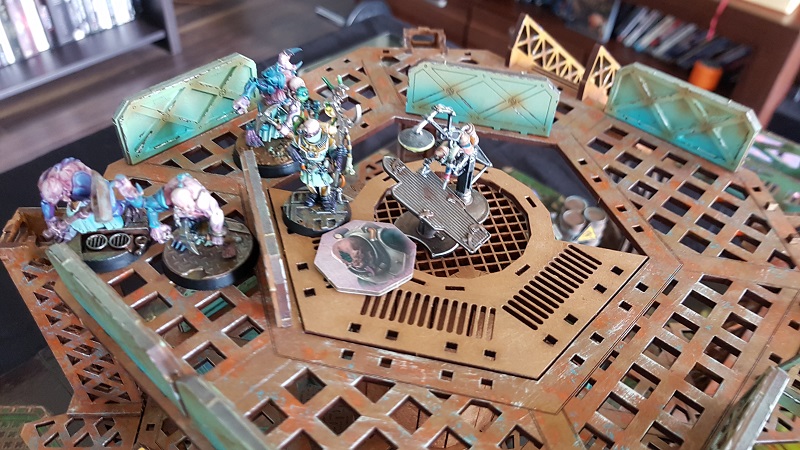 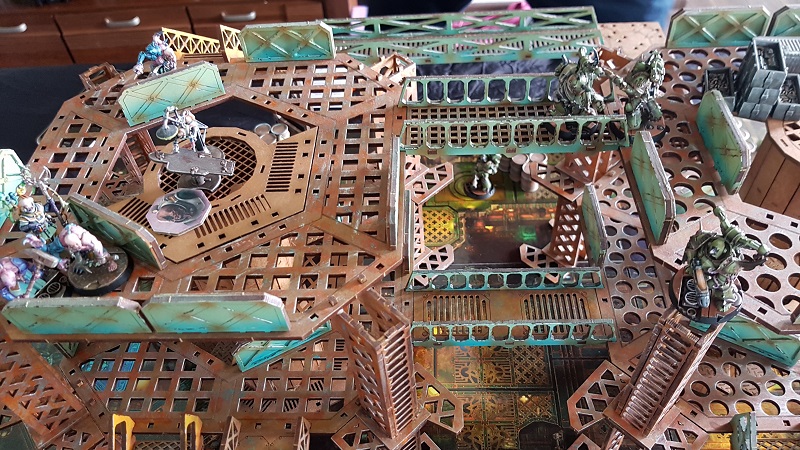 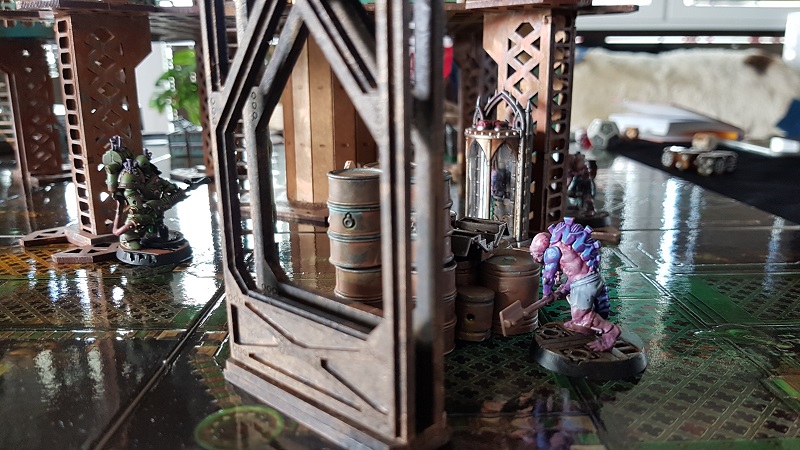 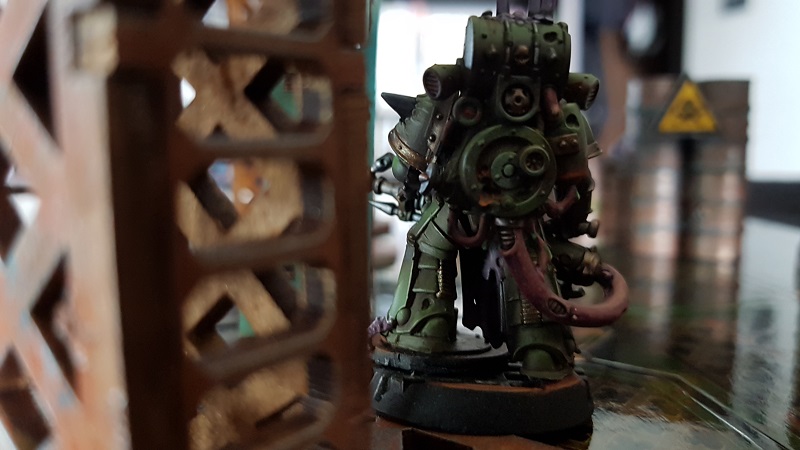 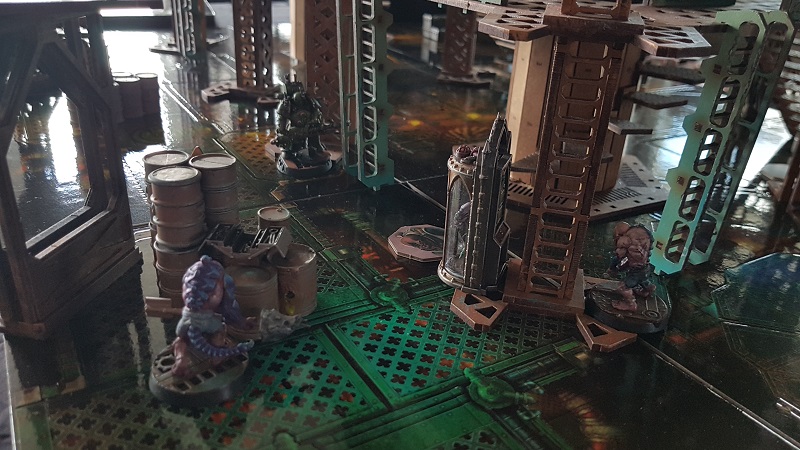 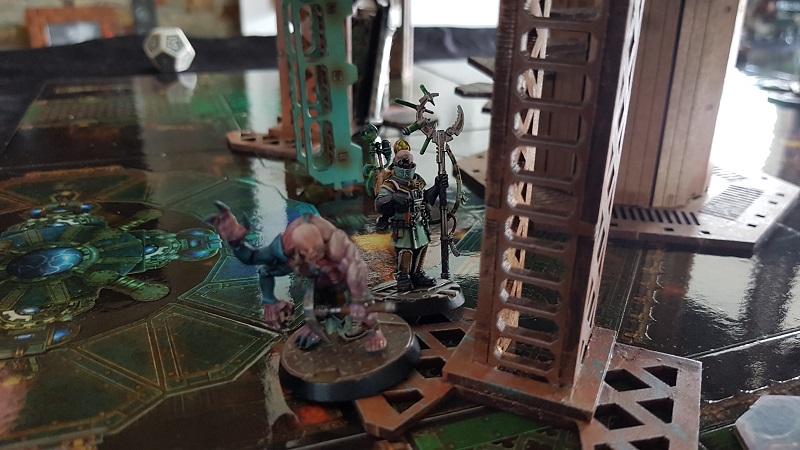 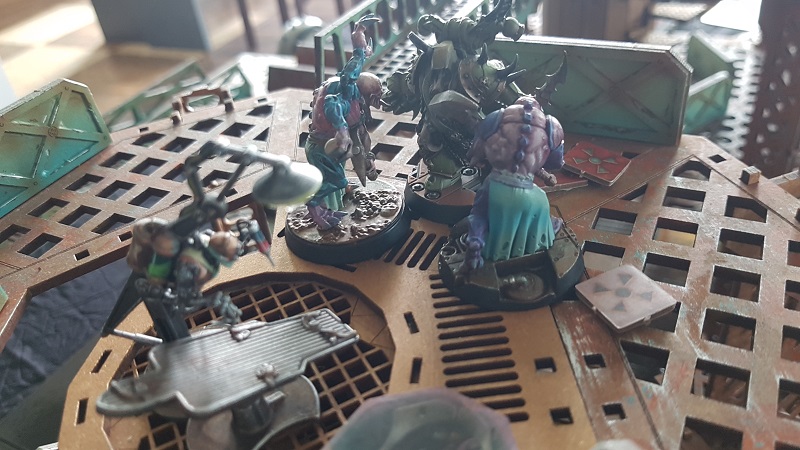 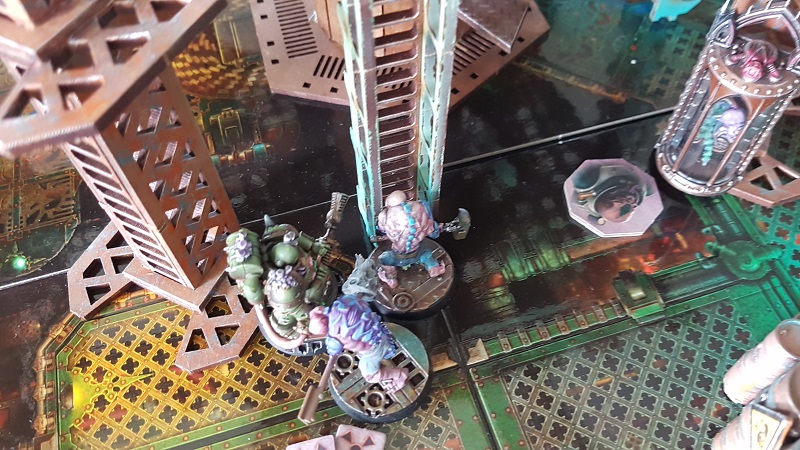 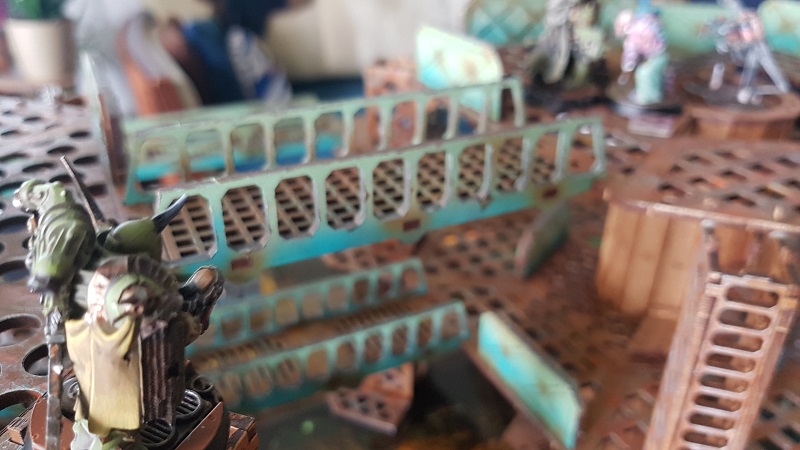 To take a break we got back to Kill Team for this mission. Sabotage mission – one where attacker needs to find out which one of three objectives on board is most important and then destroy it while controlling it. Selected strike force deep strike into a facility where Biophagus run his shop. Its a kind of medical facility that also provided upgrades for the entire force. I wanted to go deeper into the „mad scientist and his insane creations” theme and picked a force made entirely from abberants and the Biophagus who was just sitting in his lab and upgrading them one by one each turn. Plan half worked as most of the fighting took place in the lab itself. Smart scientist decided to evacuate to the lower parts of the facility as soon as the fight got intense. Some Abberants took a stand fighting off nurgle force close combat specialists while Biophagus climbed down the ladder chased by plasma fire. In some other parts of the lab group of abberants ambushed another plague marine and soon most of the combatants an all sides were locked in mele. Its quite common in our games that models are dying very slowly and instead acquire lot of flesh wounds. Here it went exactly the same and quite few guys ended up with 2 or even 3 flesh wounds on them. Fortune changed few times during the game but after some lucky re-rolls cult forces gained the upper hand. Mission ended after 4 turns which gave little time for attackers to succeed. So it looks like Death Guard attack was repelled.

What’s next? They will probably fall back to the ruins to get themselves dug in and try to complete the ritual. Cult forces will be in pursuit this time and try weaken them down before the final battle.