It so happens that my recent move to a new flat has given me an excuse to rethink and reorganize my work space. Here I want to show you how it went and write some of my thoughts on what in my opinion is important in organizing this kind of area.
To be honest finishing my flat is only one reason why I’m writing this article as the main inspiration really came from polish blogosphere initiative called „miniatures blog carnival” which is a series of hobby related topics that are being wrote about by many different polish bloggers. You can find more about it here. 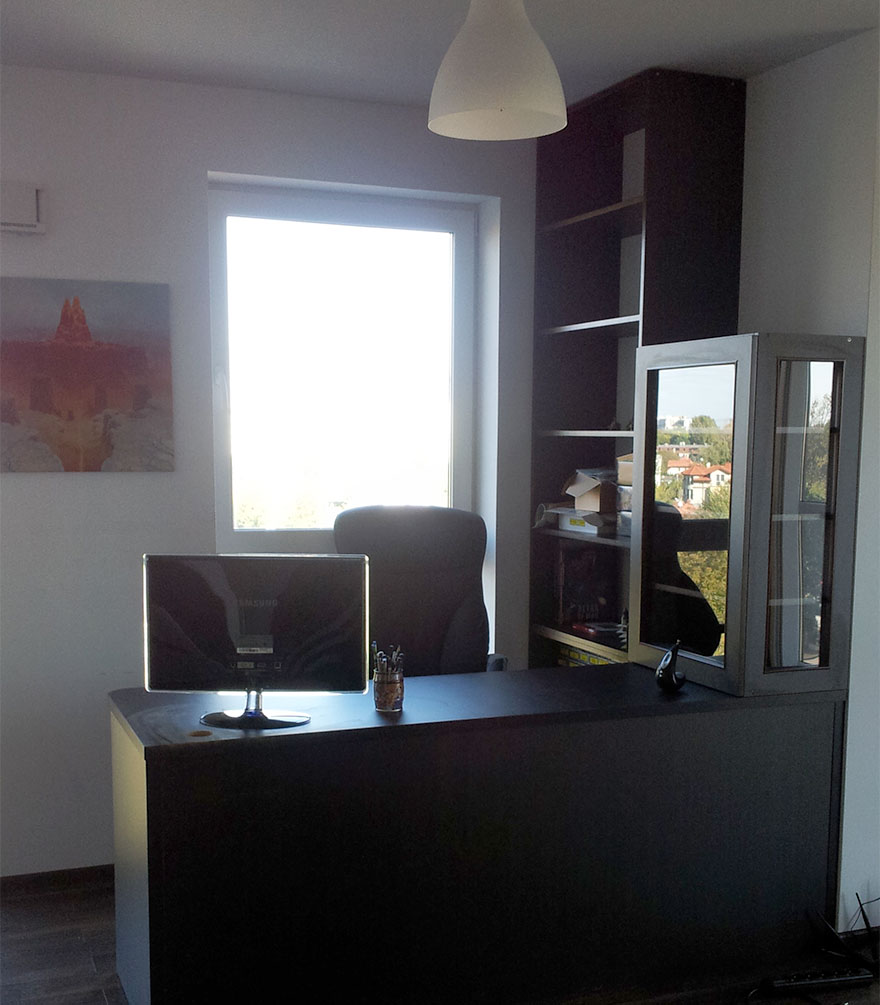 So where to start? As always with what’s limiting us the most. To no surprise in my case it was the space. I wanted to have both a painting/modelling area and also kind of an office work area for my desktop PC and paperwork. Having limited space and not willing to make a choice between those two I’ve opted for a large custom-made desk that can support both such areas. With about 2 meters of length there was enough space for two keyboard holding drawers, one indeed for keyboard and the second one of cutting mat, tools and some bits that are not needed all the time but would be nice to have at hand. 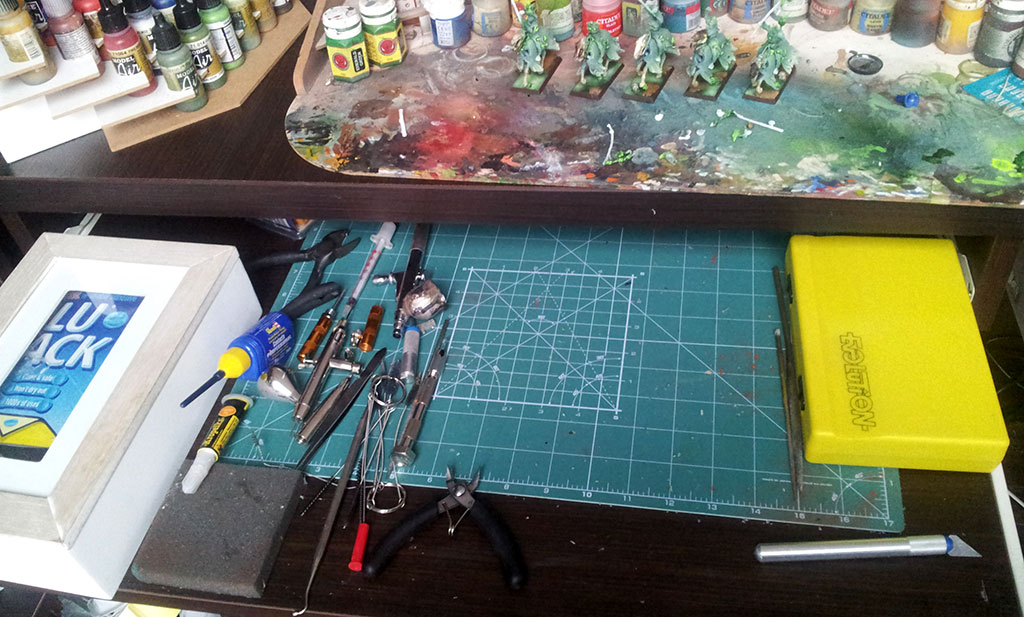 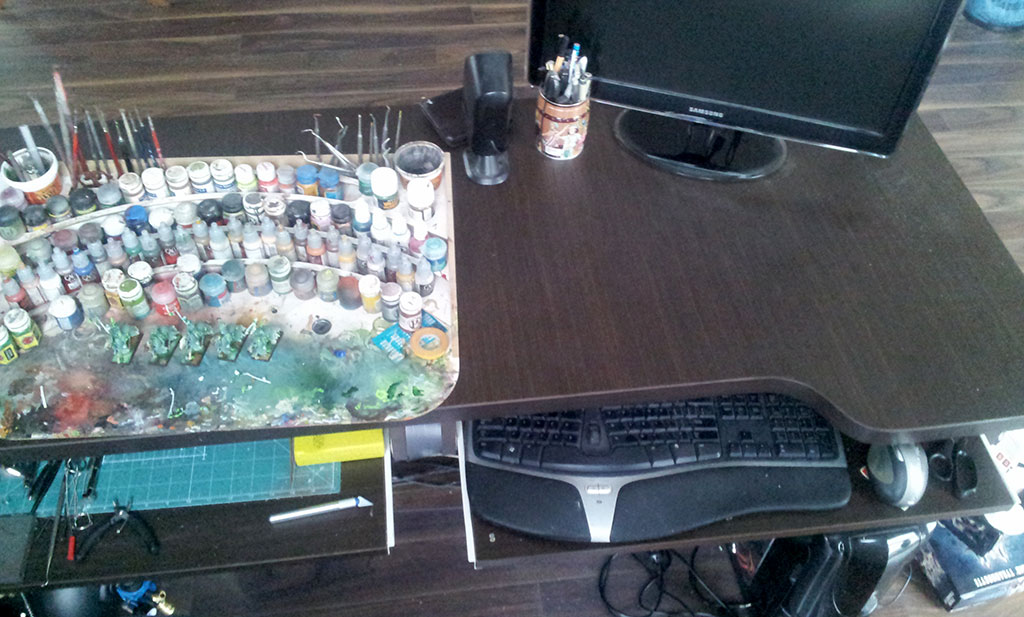 Another important factor was the lighting. I’ve already had a great white-light lamp that would serve me well at night but I’ve also wanted to have some alternative for day time. Having a flat with a lot of windows it would be a shame not to make us of it so the obvious choice was to position the desk next to some window. Please note that most people are placing their desks so they are facing the windows when they sit. Its usually done to save space, however if you have a choice then its best to have window behind your back. This way sunlight will actually lit things you are looking at instead being constantly in your face. The same goes for lamp. Always try to have it behind you and little to the side (so your shadow will not fall directly in front of you). 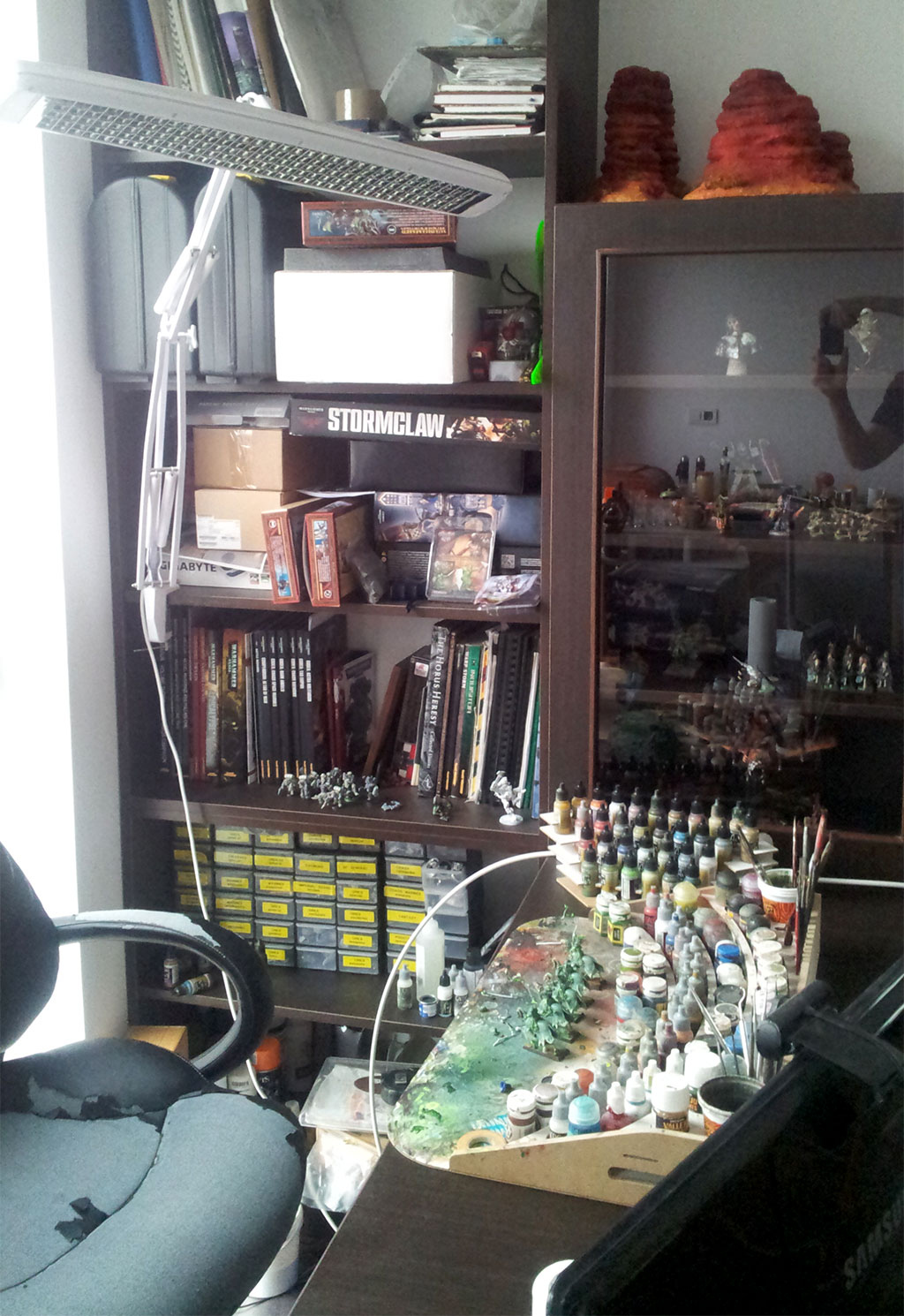 Since my desk was in my living room i wanted it to be easily cleanable whenever I have some visitors. Ive already mention the drawer for cutting matt and tools but usually the most space is taken by painting area, paints and the brushes. That why I’ve invested in painting station from hobbyzone, a polish company specializing in this kind of things. Its really a great way for organising your hobby staff that can be easily packed up and hidden on a shelf or in my case under the desk. This way i can tidy up the area quickly whenever i want it to look clean or need the space for some other temporary task. 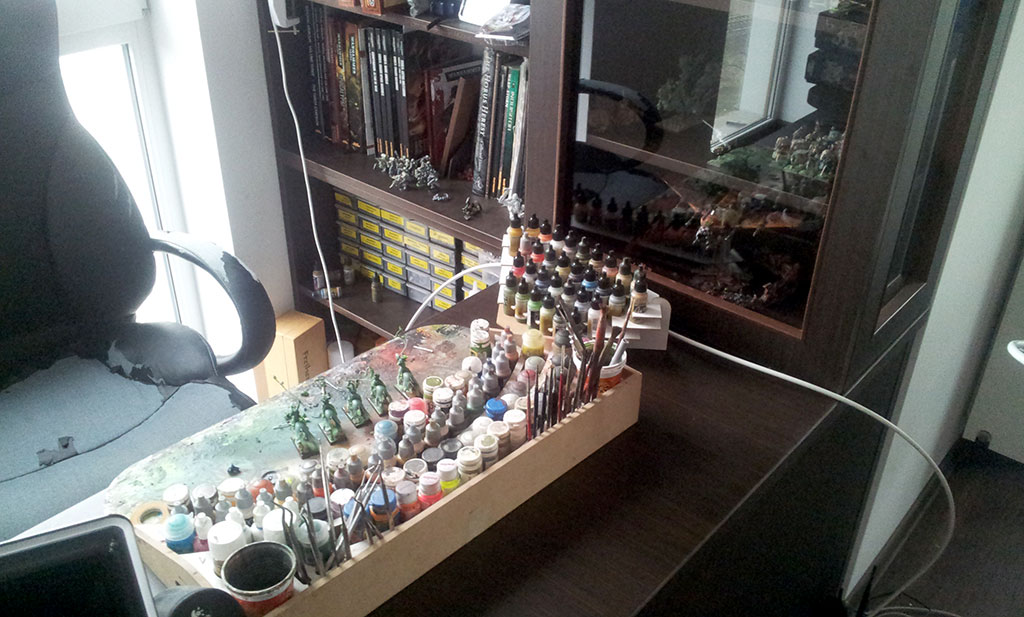 Bookshelf is another thing that helps organising this space as it holds all other less frequently required things, like books and codices or bits boxes, spray cans and other supplies at the arms reach. Its not only used for hobby stuff as im also using it to hold some documents and office supplies. I try to keep the most messy stuff like paints, glues and other hobby supplies on the lower shelves, preferably under the desk surface level and out of the view. Whats in there is a story for separate article so lets stay focused on organising the work area for now ;). Under the desk i also keep my air compressor for the airbrush. On the middle most exposed shelved are the books and eye catching boxes with unpainted minis. In other words the stuff that looks good even to non-hobbists 😉 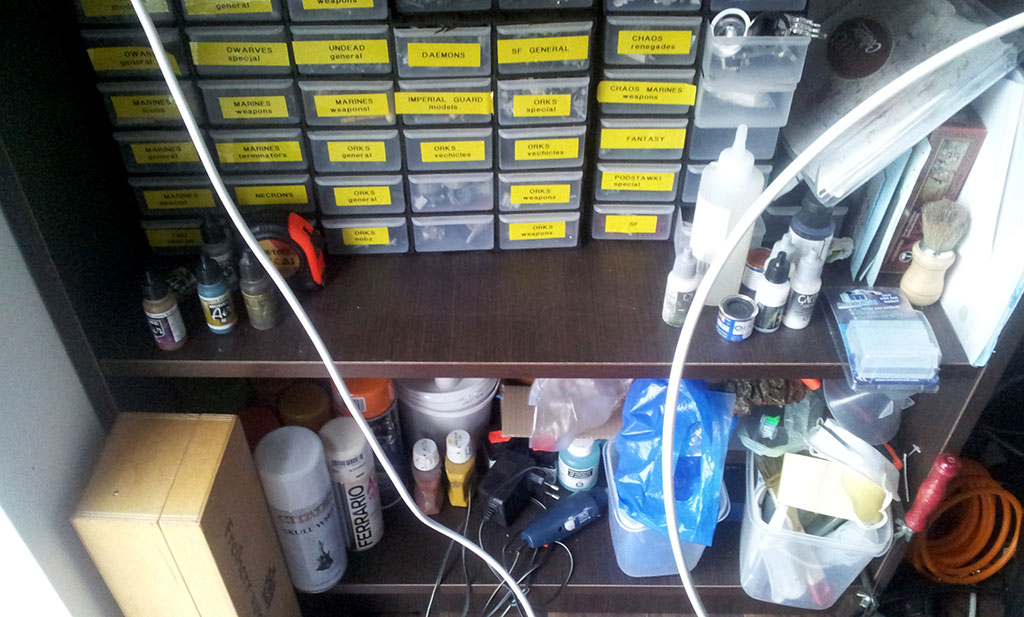 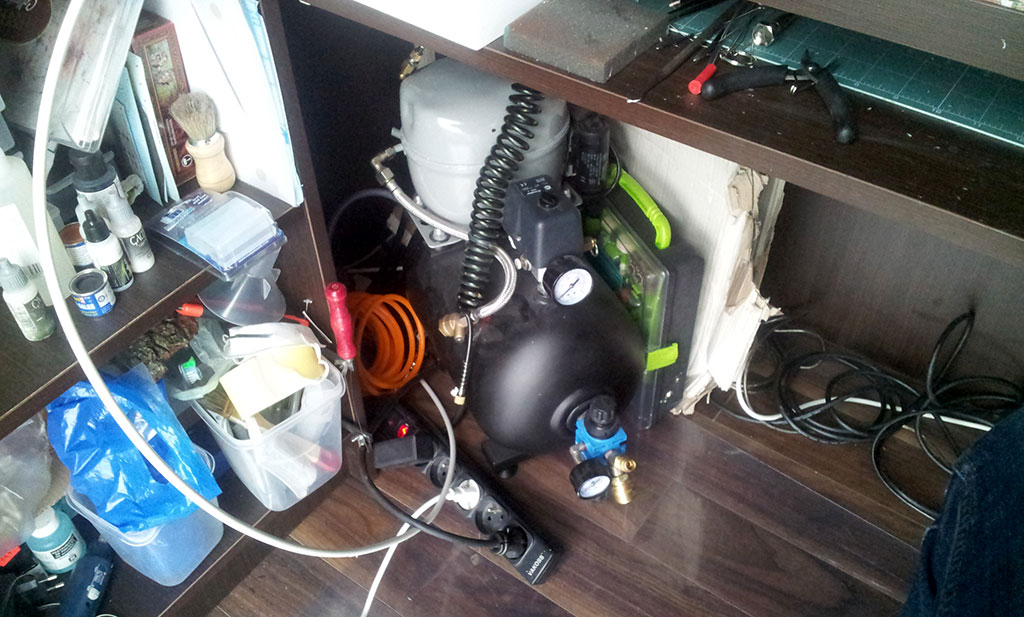 And talking about eye-catching expositions I also have a small cabinet with glass sides standing on the desk to show my most prized/recent/needed for gaming stuff. Its still a bit work in progress as i want to add some led lights to it. I’ve also haven’t decided yet if i want it to open on the seat or the room side so i can have easier access to it when i’m painting or when I’m gaming. Also i think i will go for the whole glass cabinet in the near future as it allows for much better exhibition.

So that’s it. So far it feels like a comfortable place to work, but im only using it for a couple of months so time will tell how useful it will prove to be and if it will hold against my expansionist tendencies when it comes to hobby stuff 😉